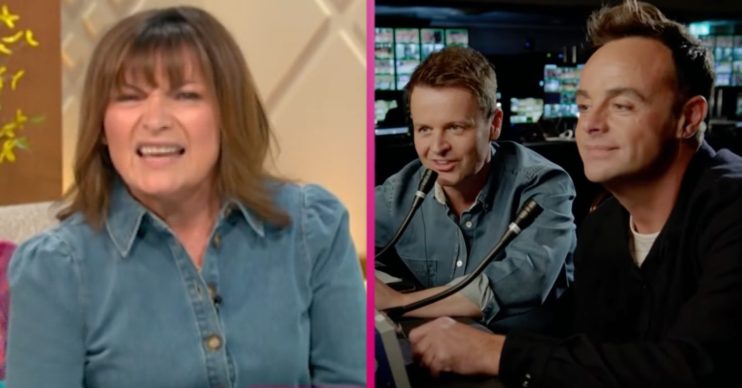 The presenter faced a series of unusual setbacks

Lorraine Kelly has left viewers convinced she is part of a Saturday Night Takeaway prank.

On her ITV show today (March 22), the 60-year-old faced a number of bizarre setbacks during her interview with rapper KSI.

Viewers picked up on the strange behaviour, which ranged from complaining about a fly to suffering from cramp.

What happened to Lorraine Kelly?

During the chat, Lorraine repeatedly told the star she couldn’t wait to see him.

Furthermore, the studio was invaded by a mouse and she was also caught yawning.

Meanwhile, at one point, Lorraine halted the interview as she dealt with cramp.

She told KSI: “Oh darling I’m sorry… I’ve got cramp in my leg

“Ah sorry it’s really annoying. It’s poppycock that is what it is.”

The presenter then proceeded to walk it out.

How did Lorraine viewers react?

And it didn’t take long for viewers to pick up on the odd behaviour.

Following the segment, some predicted the much-loved star was taking part in I’m A Celebrity… Get Out Of Me Ear.

The hilarious prank sees Ant and Dec give a celebrity instructions to do via an earpiece.

Something seems off with Lorraine this morning

Taking to Twitter, one fan wrote: “Maybe it was an Ant and Dec prank! It surely can’t be real!”

Another predicted: “Can’t work out if Lorraine has had a heavy weekend or if it’s an Ant and Dec prank and they are in her ear.”

In addition, a third shared: “Ant and Dec Saturday Night Takeaway I reckon!”

Watch the hilarious interview with @KSI in full ➡️https://t.co/vn8NeFi106 pic.twitter.com/nmATam3Mzm

Is Lorraine drunk?? Has she got a list of weird phrases to include?? This is the most random interview ever!! #lorraine

A fourth added: “Something seems off with #Lorraine this morning. Feel like we will see her on Saturday Night Takeaway when Ant and Dec are telling her what to say.”

Furthermore, a fifth said: “Has Lorraine got @antanddec in her ear during this interview?!”

Another tweeted: “At the end of she show she said ‘All will be revealed.’ It was obviously done on purpose so that the odd bits can be clipped together to make a video for something.”

Read more: Harry and Meghan: Lorraine Kelly tells couple to ‘get a grip’ after latest controversy

Lorraine is yet to appear on the popular Saturday Night Takeaway prank.

Meanwhile, it comes shortly after Davina McCall left viewers in hysterics during the hilarious segment.

She pretended to be fronting a new fitness app, and put a team of unsuspecting volunteers through a series of ridiculous exercises.