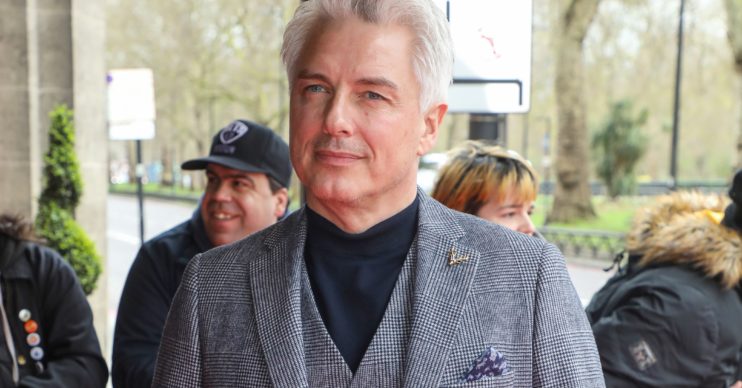 The Dancing On Ice judge appeared on Friday's show

However those watching at home couldn’t help but be surprised by the striking similarities between the Dancing On Ice judge and his other half!

John and Scott are currently on lockdown in sunny Palm Springs. They therefore called Christine Lampard, Judy Love, Nadia Sawalha and Kay Adams from beside their beautiful pool.

John revealed they were supposed to be back home in the UK by now, but have been grounded Stateside by the coronavirus outbreak.

His husband looks like his twin brother 🤫 #LooseWomen #johnbarrowman 🏳️‍🌈

Is barrowman married to his brother 🥴 #LooseWomen

Is it me or has John barrowman married a clone of himself!!!! #loosewomen

Well, they do say we’re attracted to people who look like us!

Why was John Barrowman on Loose Women?

The couple were appearing to discuss their 27-year relationship as Loose Women celebrate Pride.

John told the story about Cher gatecrashing their first date. John turned down her offer of dinner as he had plans with Scott, so she ended up having dinner with them both!

The evening ended with John kissing Cher in front of the paparazzi, but going home with Scott!

The strange first date didn’t put the couple off and they married in 2013. They got hitched on the day it was made legal in the US.

They also witnessed lots of other weddings on that day.

John said: “We stood for probably about 10 to 20 different weddings. We witnessed all of them that afternoon and we recorded them for them and it was a really emotional day because those were the men and women that set the groundwork for Scott and I to be able to stand there.”

Kaye asked him about the atmosphere in the States at the moment. John quipped: “In the sense that we’ve got a nutcase running the country?”

He then added: “The atmosphere here is that Pride month has become more than just about gay Pride. It’s all minorities who are being marginalised – and that’s the gay, lesbian, transgender community, the Black Lives Matter, everybody is banding together because we are proud.

“Everybody is finding the one cause now and that’s to not let anyone be marginalised.”

Read more: Eamonn Holmes begs This Morning viewers for help as he bickers with wife Ruth

Christine cut John off mid-sentence as the show came to an end.

But it didn’t stop him finishing things in typically flamboyant fashion. He subsequently jumped into his pool to cool off from the 42 degree heat!