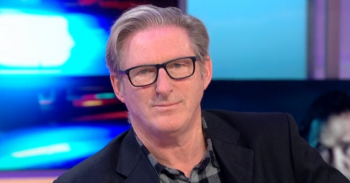 He also refused to spell 'definitely'

And contrary to hints dropped yesterday by his co-star Rochenda Sandall, who plays gangster Lisa McQueen, he appeared to confirm viewers will finally learn the identity of the villain ‘H’ when series five concludes.

Adrian, Line of Duty’s beloved AC-12 gaffer Ted Hastings, promised that everything will be wrapped up and ‘H’, who is believed to be a high-ranking police officer, will be exposed once and for all.

Appearing on GMB on Tuesday (April 30), Adrian managed to dodge spoilers as hosts Piers Morgan and Susanna Reid quizzed him on his character Ted, who was arrested in the latest episode after he was linked to the killing of undercover cop John Corbett (Stephen Graham).

When they asked him whether or not Ted is the mysterious ‘H’, he replied: “I can’t say… I’m not gonna answer that question.”

He then explained: “You’ve got this big finale coming up on Sunday, a 90-minute feature-length episode, lots of interrogation.”

Piers continued to probe for the truth but Adrian remained coy – although he appeared to confirm that the final episode of series five will reveal the identity of ‘H’.

He said: “Sunday night at 9pm. Tune in like the rest of us and you’ll find out.”

Susanna took a different approach as she tried to get Adrian to spill the beans and asked him to spell the word ‘definitely’, but Adrian refused.

It was a reference to a potentially crucial moment from an earlier episode. Viewers thought they’d spotted a blunder as ‘H’, who was speaking to OCG members via text on a laptop, misspelled it ‘definately’

Fans on Twitter poked fun at what they thought was a spelling mistake on the part of the show’s writers, but others argued that it’s more likely to be intentional – a critical clue for later in the series.

In an episode since then, Ted Hastings was communicating on a laptop with the criminals, pretending to be ‘H’, and also wrote the word as ‘definately’. Does that mean he’s ‘H’ after all? We’ll find out next Sunday (May 5) at 9pm on BBC One.