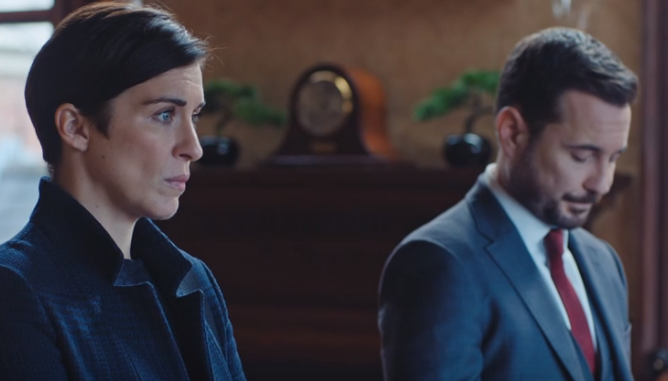 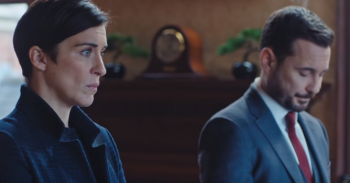 Line of Duty: Five crucial questions after the fifth episode

The finale is just around the corner

Episode five of Line of Duty aired last night (April 28) and the hunt for corrupt high-ranking copper ‘H’ continued to intensify as the series finale approaches.

In the fifth episode, AC-12 was removed from the investigation into undercover officer John Corbett for taking too long, but Ted Hastings ignored the order and took matters into his own hands.

Everyone’s favourite Northern Irish copper set up and carried out his own mini undercover operation, heading out to the night club used as a base by the organised crime group (OCG) and posing as ‘H’.

Elsewhere in the episode, Gill Bigelow continued to look shifty, Steve Arnott and Kate Fleming made the decision to report their own gaffer, the OCG’s Lisa McQueen was dragged in for questioning and poor Ted was suspended from the force and arrested.

Here are five questions we need answering before this series ends.

Is Gill Bigelow colluding with the OCG?

Gill, legal counsel to high-ranking coppers, could turn out to be H. That’s according to viewers, many of whom think she’s colluding with the OCG – not on a low level, as with Hargreaves and others who were in the criminals’ pockets, but actually pulling the strings as the mysterious ‘H’.

In episode five, she once again urged Ted to save his otherwise distinguished career by retiring, and even offered to help him with the legal side of his misconduct charges.

But wouldn’t it stand to reason that if Gill is H, she’d want Ted to take the fall? Either way, it’s likely she’s hiding something. 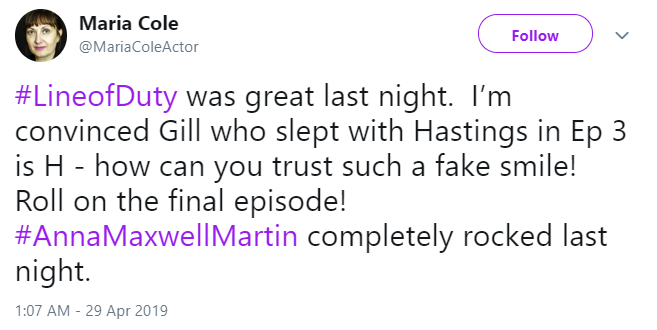 Ted was questioned about his visit to OCG member Lee Banks at Blackthorn prison, where it’s suspected he revealed John Corbett to be an undercover cop – most likely in revenge for Corbett assaulting his wife.

Unfortunately for Ted (and viewers, at this stage), he broke police procedure and failed to record the conversation or bring along an official witness.

What did Ted tell him?

Did Ted have anything to do with the death of John Corbett’s mother?

Episode five served up some background info on John Corbett. He’s played by one of TV’s most famous Scousers but it appears Corbett was born in Belfast to Northern Irish parents before he was adopted by a family in Liverpool.

While investigating Corbett’s past, Steve and Kate discovered that his mum, Anne-Marie, was killed for allegedly helping the police as an informant. When her body was discovered over a decade later, she was found to have been shot in the head and had injuries to her wrists, knees and ankles – the same parts of the body that Corbett hit when he attacked Ted’s wife.

Ted, who was a copper in the Royal Ulster Constabulary at the time, was found to have taken three months off work on medical grounds shortly after Anne-Marie disappeared. Did he have anything to do with what happened?

Why was Jackie Laverty’s body dumped with Corbett’s?

The OCG dumped Corbett’s body in a building yard but unusually, when police opened up the body bag, it was found to also contain the dismembered body of Jackie Laverty, who was the mistress of policemen Tony Gates back in series one.

She was killed by the OCG to blackmail Gates into working with them. But why would she be dumped, years later, with Corbett?

Is Lisa McQueen an undercover cop?

Read more: Is BBC’s Line of Duty the “best drama ever” or “ludicrous and overhyped”?

We know Lisa’s not all bad. Yes, she’s one of the key members of the OCG, but she’s not completely rotten on the inside. After all, she was the one who spared Jane Cafferty in the hijacking, and she broke down after seeing Corbett killed.

There’s more to her than meets the eye. Is she an undercover cop? A number of fans think so. One wrote on Twitter, “Anyone else convinced that Lisa is working with Hastings undercover?” Another said, “I still think Lisa is undercover of some sort”, and a third wrote, “Lisa is undercover too and Steve knows”.

Are you looking forward to the Line of Duty finale? Leave us a comment on our Facebook page @EntertainmentDailyFix and let us know what you think.