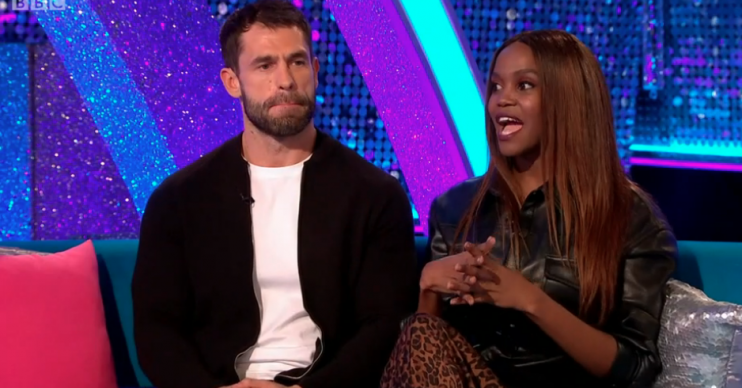 The former Emmerdale actor, 35, told fans he and dance pro Oti had ‘come to blows’ on more than one occasion following a “hard” week in which they have been preparing to perform at Cha-Cha-Cha this weekend.

They are expected to take to the dance floor tonight to show off their ballroom skills to Get Stupid by Aston Merrygold.

And even though the pair remain among the favourites to win the entire series following their storming performances so far – including a rumba that left viewers and judges alike panting for more – it seems their intensive training schedule is taking a toll.

What do we call Fridays????? Freaky Friday’s and why???? Because it’s studio day and quite intimidating but you push through and fight the fight

A clip shared yesterday by 29-year-old Oti on her Instagram account showed the duo rehearsing in a dance studio – and revealed they have not been seeing eye to eye at all times.

Asked whether he felt ready for this week’s performance, Kelvin replied: “I hope so, it’s been a hard week.”

Agreeing, he replied: “We came to blows a few times, but we got there in the end.”

Read more: Katie Price desperate for the nation ‘to fall in love with her like the I’m a Celeb days’

“We got there,” Oti concluded, suggesting any wrinkles had been ironed out.

ED! has approached representatives for both Kelvin and Oti for further comment.

Kelvin has been going all out with his training regime for the show, with reports claiming he has dropped nearly a stone during rehearsals – despite eating 3000 calories a day.

His hip-wiggling efforts are also said to have caught the eye of West End producers.

– Week five of Strictly Come Dancing 2019 continues tonight on BBC One at 6.40pm