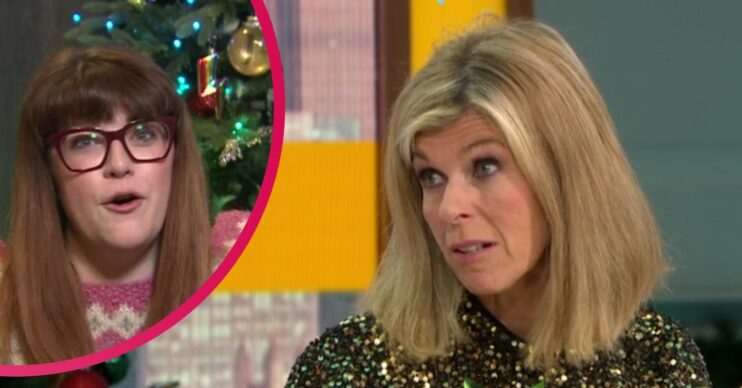 Kate Garraway under fire for GMB interview with Jenny Ryan

She was accused of turning GMB into "The Kate Garraway Show"

Kate Garraway has come under fire from viewers during an interview with The Chase‘s Jenny Ryan today (Friday, December 24).

Many GMB viewers have accused the presenter of making the interview ‘all about her’.

Why was Jenny Ryan on GMB this morning?

Jenny Ryan, aka the Vixen on The Chase, appeared on Good Morning Britain today to talk about The Chase’s Christmas special. The special festive episode airs tonight at 5.30pm on ITV.

“It’s a real treat for us,” Jenny said. “For me, it’s like the office Christmas party. It’s the only time every year that the six of us Chasers are together.”

The conversation then shifted away from The Chase, and on to what Jenny’s plans were for Christmas. The Chaser revealed she was going to be enjoying her mum’s cooking tomorrow.

Richard Bacon then turned the conversation to ask his co-host, Kate, about her Christmas plans.

“Kate, it’s interesting for you, because last Christmas Eve for you and your family – very different to this one,” Richard said.

“Absolutely,” Kate replied. “I suppose last Christmas Eve we did have a lot of promise and a lot of hope, but Derek [Draper] was in hospital.”

Kate then went on to discuss her Christmas plans this year and Jenny disappeared from screen.

What did GMB viewers say about Kate Garraway?

Whilst Kate’s good news will have warmed the hearts of many, some GMB viewers weren’t impressed.

“Kate totally forgot about poor Jenny, once again, it’s all about Kate,” one viewer tweeted.

“Meanwhile Jenny Ryan left on hold whilst Kate Garraway makes @GMB the it’s all about Kate show,” another said.

Read more: GMB viewers all have the same complaint as Kate Garraway hosts with Richard Bacon

“We’ll just put the wonderful Jenny Ryan on hold as we go live to the Kate Garraway show,” a third viewer sarcastically tweeted.

You can catch Jenny Ryan on The Chase Christmas Special tonight at 5.30pm on ITV and ITV Hub.

GMB airs tomorrow at 7am on ITV and ITV Hub.

What did you think? Head to our Facebook page @EntertainmentDailyFix and let us know.