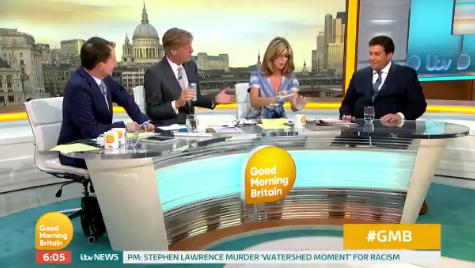 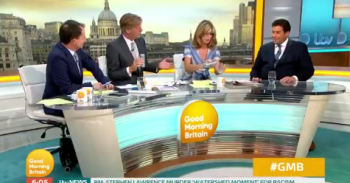 James ‘Arg’ Argent turned down an alcoholic drink on Good Morning Britain today after being sober since last year.

Hosts Kate Garraway and Richard Madeley were joined by TOWIE star Arg, who was making his presenting debut on the daytime ITV show.

In light of Shadow Home Secretary Diane Abbott recently being caught drinking a can of mojito on the train, the presenters whipped out a few drinks of their own just after 6am.

When it’s Monday morning but you’re not ready for the Bank Holiday to end… pic.twitter.com/2UHaqn72Hq

But host Kate Garraway clearly wasn’t aware the reality TV star was off the booze after a string of personal struggles and a stint in rehab last year, and offered him one.

“Do you know what? I’m going to say no because I’m eight months clean and sober,” Arg replied.

Slightly taken back, Kate asked: “Are you? Is that a decision you made?”

She went on: “I’m sorry. I didn’t mean to tempt you. I didn’t know you had made that decision.”

“It was a decision I made eight months ago,” Arg said.

Despite the awkward blunder, which Kate later apologised for, James didn’t appear fazed and went on to offer his opinion on Diane Abbott’s train drinking.

“I’m not against her having a good time! I was actually thinking is she an Essex girl! It’s very much an Essex girl thing to do,” he said. “A little cheeky mojito on the tube.”

Meanwhile, his first GMB presenting stint appeared to go down a treat with some Twitter viewers, who said he did “an amazing job”.

A second shared: “@RealJamesArgent did amazing on GMB. Comes natural.”

Though others were riled that he dropped a major Line of Duty spoiler – ruining it for anyone who hadn’t yet seen Sunday night’s episode.