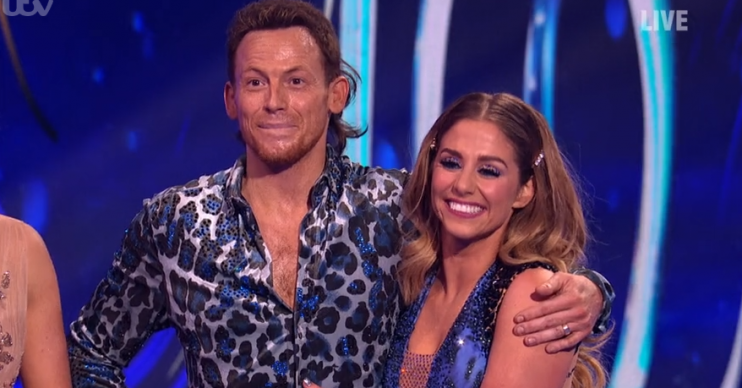 Joe has to wear a huge bandage around his head

Joe Swash left Dancing On Ice rehearsals with a massive bandage wrapped around his head after being struck down with an ear infection.

But it sounds as if Joe will still be able to skate in this weekend’s highly-anticipated final.

Joe’s girlfriend Stacey Solomon was at home worried because he was late back – but as soon as he walked through the door the reasons for his late arrival were apparent.

Stacey posted pictures to Instagram with the laughing emoji as she took in her boyfriend’s appearance.

Stacey then reassured worried fans that Joe’s condition is not serious.

“Joe is safe and well and still dancing, he just had some sort of ear infection and it looks like they’re being cautious,” she wrote.

The couple were all smiles this morning as they cuddled up with their baby son Rex.

Joe and his pro partner, Alex Murphy, will perform in this Sunday’s final after wowing fans and judges last weekend.

Joe performed an emotional dance to Simply Red’s Stars, which was played at his late dad’s funeral.

He also wowed fans when he ripped open his shirt to reveal a six-pack during a performance to Do Ya Think I’m Sexy? by Rod Stewart.

Joe has a ripped body despite previously admitting he’s put on weight during DOI training thanks to snacking.

He previously told us: “I haven’t touched the gym. I’m not great at training either.