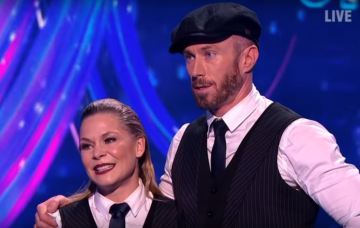 James Jordan’s Dancing On Ice future could be under threat after painfully ‘ripping open’ his hernia.

It is believed the ex Strictly Come Dancing star was left in extreme discomfort when the dramatic injury occurred during rehearsals this week, leaving his fellow celebrity contestants ‘terrified’ over his health.

ITV bosses are also reportedly said to be concerned the injury could rule him out of this weekend’s semi-final – and the rest of the competition.

James told the Daily Star he was “falling to bits” due to the knock-on effects of the agonising physical issue.

“I’ve ripped open my hernia,” he revealed to the newspaper.

“I’ve also got lower back pain because of it. I’m falling to bits.”

The 40-year-old added: “Managing injuries is getting harder as you get older.”

He also admitted it has been “hard” to train with his pro partner Alexandra Schauman ahead of the crucial final stages of the skating contest.

The stone age meets the ice age ❄️ @The_JamesJordan and @AlexandraLukasz are having a Yabba Dabba Do time! #DancingOnIce pic.twitter.com/bvLy3QOmQ1

James – who is among the show’s final four participating celebs alongside Brian McFadden, Saara Aalto and Wes Nelson – denied he would be withdrawing from the show earlier this month following a nasty fall on his hip.

He tweeted to his 245,000 followers: “Just to clarify some of the rumours that I might have to pull out of @dancingonice.

“I was asked about any injuries of which I have lots… but never considered pulling out. I am loving the whole experience and loving the support even more. I can only do my best, love you all.”

Last week it was reported James accidentally dropped Alexandra on her head during a practice session.