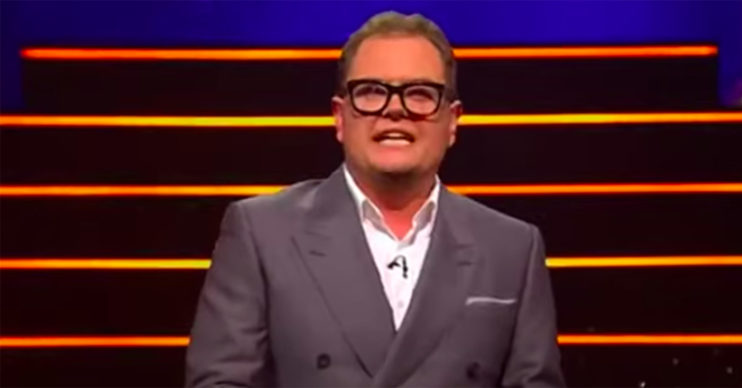 The Epic Gameshow suffered a serious blunder within its first few minutes.

Alan Carr’s Epic Gameshow may have helped raise thousands for charity last night, but it was an epic blunder that really got viewers talking.

During the ITV special, the incorrect names for a celebrity couple were displayed.

When Ore Oduba and wife Portia appeared on screen, they were mistakenly labelled Eamonn Holmes and Ruth Langsford.

The This Morning couple were indeed also competing on the show – and went on to win the prize.

One Twitter user shared: “Two mins in to #AlanCarr’s #EpicGameshow and the editor has already absolutely chucked it.

“Surely can’t have been that busy the last few weeks getting this ready? #Shocker.”

A third user tweeted: “This has been nearly a year in the making for ITV, and transmission of the series has been delayed several times over the past few months.

“You’d have thought someone would have picked up on this mistake #EpicGameShow.”

And a fourth user quipped: “Eamonn Holmes has changed #epicgameshow.”

Despite the blunder, many viewers still voiced their approval of the series.

Some said they feared Play Your Card Rights wouldn’t be the same without the late host Bruce Forsyth – but were pleasantly surprised.

One user tweeted: “I never thought #PlayYourCardsRight could work without Sir Bruce Forsyth, but Alan Carr was brilliant on there tonight.

“Please @ITV can we have a full series?

“Looking forward to the rest of the #EpicGameshow.”

While another shared: “Alan Carr could definitely pull it off as a modern day Bruce Forsyth. Doing game shows really do suit him #EpicGameshow.”

Ruth Langsford tearfully announced that she would donate her £33,000 winnings to the Alzheimer’s Society.

Husband Eamonn went on to write a poignant message regarding her win.

Addressing his some one million Twitter followers, he wrote: She had reasons to shed those tears. So proud of  @RuthieeL winning £30k for
@alzheimerssoc on tonight’s Play Your Cards Right.

“Keep on Keeping on in your crusade against this awful disease darling.”