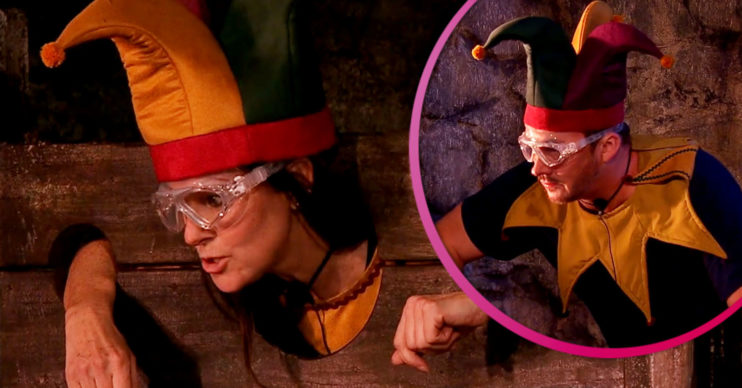 The remaining campmates watch on

The pair will face Stage Fright as their fellow 10 campmates watch on.

In a teaser clip for Wednesday night’s show (November 18), Ruthie and Russell are seen dressed as Jesters in the medieval theme trial.

What happens in the I’m A Celebrity trial?

Jordan North, who has faced three Bushtucker trials already, tells them: “Don’t overthink it. Go to your happy place.”

Ruthie and Russell are asked jokes, with the first being: “What did medieval postmen wear?” to which Russell replies: “Chain mail.”

West End actress Ruthie is then covered in rotten tomatoes.

However, Russell then has to put his face in a barrel of fish guts and try and dig out the correct punchline.

As the klaxon sounds, he has 30 seconds to find it.

The clip ends with the campmates cheering him on as he buries his face in the barrel.

Will they be able to win all the stars for camp?

Meanwhile, at the end of Tuesday night’s show, Russell and Ruthie were announced as the new campmates.

What did Ruthie and Russell say on I’m A Celebrity?

Russell said: “They’re going to see a different side to Russell Watson.”

In addition, Ruthie added: “There’s a big difference in the known and the unknown and we’re in the unknown.

Meanwhile, Russell said: “Don’t think it’s going to be fun at all. I don’t really want to think about the bugs at the moment.”

Ruthie admitted: “I think I’m a tough cookie but I am a bit terrified.”

Meanwhile, viewers shared their thoughts, with some saying they didn’t want any additions to the camp.

However, others were thrilled as one said on Twitter: “Cant wait for #imacelebrity tonight. I think Russell and Ruthie will be great additions.”

What do you think of the new campmates? Leave us a comment on our Facebook page @EntertainmentDailyFix and let us know.