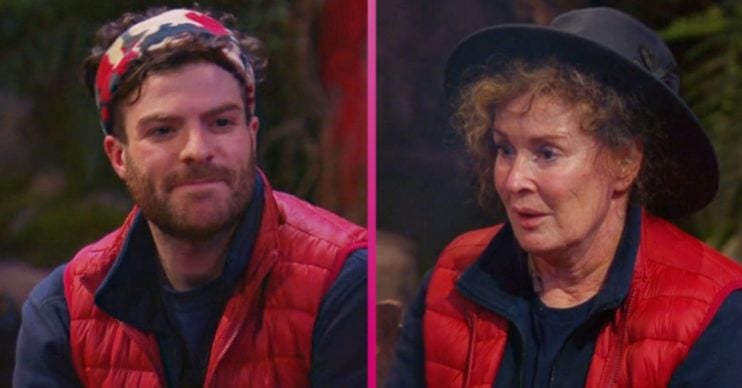 I’m A Celebrity star Jordan North confused viewers with a comment he made to Beverley last night after his performance in the Viper Vault.

At the end of the second episode of the series, shown on Monday (November 16), hosts Ant McPartlin and Dec Donnelly revealed that Jordan North, Vernon Kay and Beverley Callard would be doing the next trial.

Tonight’s show will feature the first eating trial, Frights of the Round Table.

What did Jordan North say to Beverley Callard on I’m A Celebrity?

Jordan told Beverly: “We’re going to look after you.”

On Twitter, viewers suggested Jordan was being fake as they didn’t think he would be in a position to support anyone during an eating trial.

Viewers will know that, during the first episode, Jordan was sick all over the grass at the top of the cliff, where half of the group had to abseil down to get their gear.

He had also screamed hysterically during the Viper Vault trial.

How did I’m A Celeb viewers react?

One said: “Jordan couldn’t hold a bagel down yesterday and now he is telling Beverley he will look after her in the eating trial #ImACeleb #imacelebrity.”

Another wrote: “Not being funny but Jordan saying ‘I’ll look after you’ to Beverley is the biggest [lie] of the series #ImACeleb #imacelebrity.”

A third wrote: “Jordan to Bev, ‘We will look after ya’. Mate, you puked on top of a hill and [bleep] your pants in a box, I think it’s going to be her looking after you. #ImACelebrity #imaceleb.”

A fourth put: “Jordan telling Bev he’ll look after her on the trial when he can’t even look after himself #ImACeleb #imacelebrity.”

“#imacelebrity not Jordan saying, ‘Bev, we’re gonna look after ya’,” said a fifth. “Hate to break it to you but you’re the one who’s gonna need looking after pal.”

Jordan telling Bev he’ll look after her on the trial when he can’t even look after himself #ImACeleb #imacelebrity pic.twitter.com/0hijfoDm3K

However, others praised Jordan and said they are enjoying his blossoming friendship with the Corrie star.

Someone tweeted, with a crying emoji: “Jordan looking after Bev… the purest friendship #GetBehindJordan #imacelebrity.”

“I just love Jordan and Beverley!” said another.

Some viewers also accused Jordan of putting on a dramatic show during the Viper Vault trial.

The Radio 1 DJ was in hysterics as he was locked in a snake filled vault in last night’s trial with Shane Richie.

Some viewers felt Jordan was just trying to get more screen time.

If you shout the loudest you get more screen time (so all Bev, Jordan and Shane), shame for the quieter members of the group #ImACeleb #imacelebrity #ajpritchard & Hollie – give the others a chance @antanddec

What do you think of Jordan North on I’m A Celeb? Leave us a comment on our Facebook page @EntertainmentDailyFix and let us know.