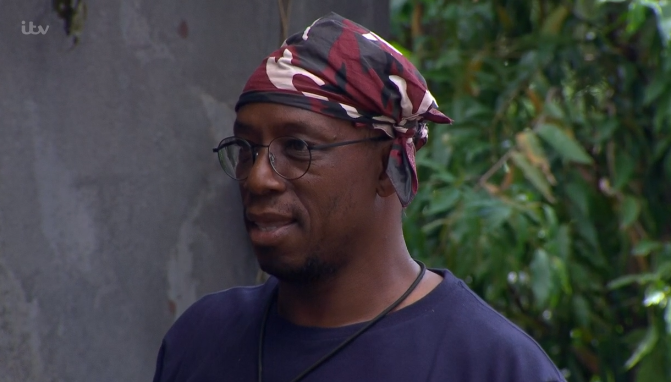 He whinged about having to do a Bushtucker Trial

Fans of I’m A Celebrity… Get Me Out Of Here! have had just about enough of Ian Wright.

The Match of the Day pundit was chosen for tonight’s trial and he immediately kicked off.

Insisting he wouldn’t eat before he left to compete in ‘Hellevator’, he snapped at Kate and Andrew.

Even ally James Haskell commented that Ian’s mood was affecting everybody else in camp.

Speaking in the Bush Telegraph, Ian said the disappointment was overwhelming after he thought Ant and Dec were coming into camp to send one of them home.

Ian really is acting like a moody wee brat this morning

Ian’s stroppy behaviour didn’t go unnoticed by the viewers at home who are seriously fed up with his behaviour.

One tweeted: “Ian’s moody, snappy behaviour over doing a trial is [bleeping] me right off.

“Cheer up man, I know you’re tired and hungry and don’t like trails but dude you weren’t forced into this show! Half the British public would pay to be in your place right now.

Ok Ian, go back to sleep, and starve! #ImACeleb pic.twitter.com/BNdT6BIXkV

get Ian Wright out he’s so moody and annoying 🥱 #ImACeleb

can we please get rid of Ian, thank you. #imaceleb


Ian competed in the trial that saw him taken in an elevator (that didn’t appear to be moving!) to different rooms filled with critters and nasties.

He had to untie a series of knots on ropes to reach the stars and complained that the knots were far far too tight.

Viewers at home actually agreed with him!

The amount of knots on the stars are ridiculous.. #ImACeleb

Ian managed to secure seven stars for the camp dinner.

He sulked after setting himself a target of eight and punched a wall after finishing.