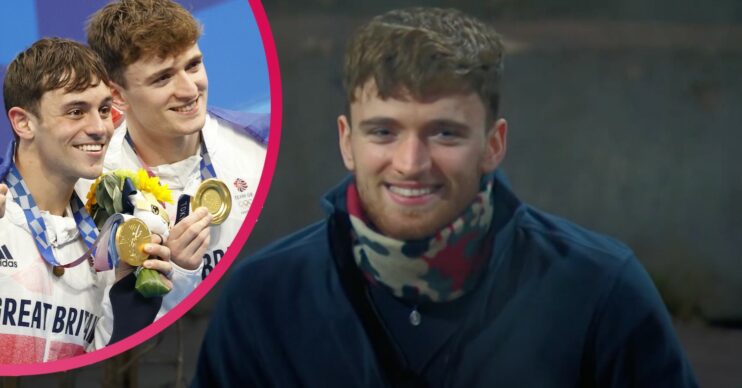 The 23-year-old gold medal winner hasn’t had a lot of airtime compared to other campmates, something his fans want fixed.

Taking to Twitter, they’ve called for ITV bosses to show them more Matty.

The sportsman’s own management company got the ball rolling, tweeting: “Please can we see more of Matty?” followed by the praying hands and sad face emojis.

Fans were quick to agree with one replying: “I thought exactly the same thing.”

Another adds: “This is exactly what I’m saying!”

Who is I’m A Celebrity’s Matty Lee?

Meanwhile, a third suggests: “Maybe get a trend started tomorrow before the show saying more air time for #TeamMatty.”

Please can we see more of Matty 😔🙏🏼 #ImACeleb

Another fan hopes that now the camps are together, Matty will get his time to shine: “I think most blokes would be quiet in the dynamic he has been in, but hopefully now the camp is one he may be seen and heard some more.”

Matty shot to fame in the summer after winning gold at the Tokyo 2020 Olympics with diving partner, Tom Daley.

Growing up he says diving was still quite a niche sport. And he thanks his now Olympics partner Tom Daley for helping to make the sport mainstream in the British sporting arena.

The British pair embraced as their triumphant scores were revealed. This is the first Olympic gold medal for both of them. And Tom Daley’s fourth Olympics.

What did Matty say about I’m A Celeb?

Speaking about heading to the Welsh castle Matty says: “Nothing ever prepares you for what life will be like after you do well in the Olympics.

“I was and still am mainly in shock that I am doing I’m A Celebrity.

“My two childhood dreams were to win an Olympic medal and take part in my favourite TV series.

“And now I am doing both this year!”