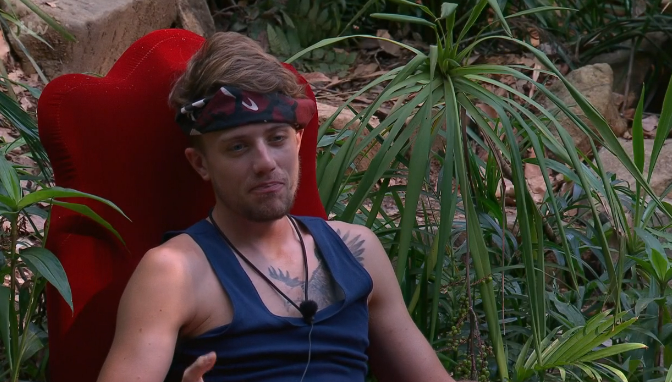 Fans of I’m A Celebrity…Get Me Out Of Here! were left cringing after a fun game started by Roman Kemp turned awkward.

To pass the time, Roman started questioning his fellow campmates on who they would swap bodies with if they could be anybody for the day.

Kate Garraway went first and admitted she would either trade with the Queen or Donald Trump!

Caitlyn then piped up that Trump never has a day off and even phoned him on Father’s Day.

Roman then admitted he’d like to be Jay-Z – a successful pop star who wakes up married to Beyoncé every morning.

Caitlyn immediately asked: “Why Jay-Z rather than Kanye?”

Kanye West, who Caitlyn was referring to, is famously married to Caitlyn’s stepdaughter, Kim Kardashian.

Roman dealt with the response very well and admitted it was because Jay-Z is a bit more understated and lives a quieter life, which Caitlyn agreed with.

But Roman later noted in the Bush Telegraph that the moment had been pretty awkward.

And that didn’t go unnoticed by viewers at home either!

Roman when Caitlyn asked why he wouldn’t want to be Kanye #ImACeleb pic.twitter.com/vDPG3djurg

Roman: I’d like to be Jay-Z rather than Kanye West.

Roman trying to explain to Caitlyn why he prefers jay-Z to Kanye #imaceleb pic.twitter.com/YFNhl68mq7

the UK watching Caitlyn question Roman as to why he would choose JayZ over Kanye… #Imaceleb pic.twitter.com/G5QbphaVWo

roman: I would want to be jay z cos imagine waking up to Beyoncé as your wife
caitlyn: why would you not want to be Kanye
roman:#ImACeleb pic.twitter.com/z1UNJ6YXL9

Roman digging himself out of why he’d wanna be Jay Z over Kanye to Caitlyn #ImACeleb pic.twitter.com/uVTXvoUZ1f

Roman when Caitlyn asked why he wouldn’t be Kanye #imaceleb pic.twitter.com/VfnVkhUfxs

Roman: I want to be Jay Z
Caitlyn: What about Kanye?#ImACeleb pic.twitter.com/kTfcpXdqN6

Earlier in the night, viewers were baffled over the campmates’ reaction to Rak-Su singer Myles Stephenson’s exit from the jungle.

As they were seen reacting to Myles’ departure, Nadine in particular was distraught.

Fans at home were baffled as to why Nadine was so upset – especially as it’s only a few more days until the final, so she’ll be seeing Myles again really soon.

Andy was thrilled he’d be getting his Bacardi and Diet Coke at last!