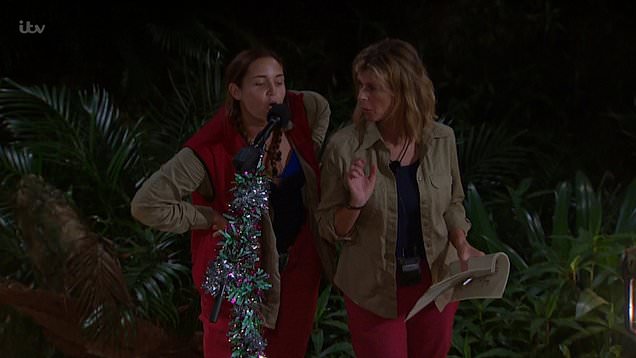 She proved she can belt out a tune!

Viewers of I’m A Celebrity… Get Me Out Of Here! were stunned this week to discover that actress Jacqueline Jossa is also an amazing singer.

On Tuesday (December 3), the former EastEnders star took part in a Christmas-themed karaoke session with her fellow campmates – and blew everyone away with her talent.

After a few bevvies at The Jungle Arms, the celebs embarked on a spot of karaoke, with good sport Andy Whyment putting on a rousing rendition of The Killers’ Mr Brightside.

Jacqueline later stood up to sing the Girls Aloud song, Sound Of The Underground, in front of the band’s lead singer Nadine Coyle.

That could have been very awkward!

But some might say Jacqueline’s own rendition of the song blew Nadine’s out of the water!

Jacqueline, who recently opened a performing arts school, sang alongside Kate Garraway – and the campmates were thrilled with Jac’s surprisingly good voice.

Rak Su star Myles Stephenson was impressed by Jac’s performance and praised her for having a “serious set of lungs”.

But her family watching from home weren’t at all shocked, and took the opportunity to share an archive film of Jac performing A Great Big World and Christina Aguilera’s Say Something.

In the video, mother-of-two Jac is also playing the keyboard… Is there anything she CAN’T do?!

Fans agreed, with one responding: “I could listen to her all day.”

Another said: “Oh my word your voice is beautiful.”

The show was recently won by Megan McKenna.