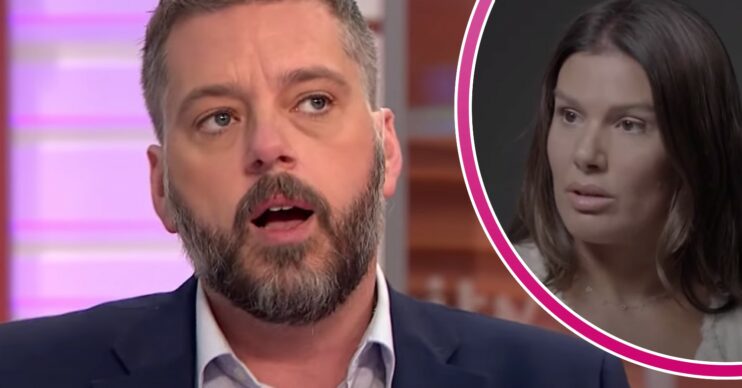 Has no wish to be 'part of her rehabilitation'

Iain Lee has slammed Rebekah Vardy after she ‘denied’ being a “bully” during their stint on I’m A Celebrity.

Broadcaster Iain, 49, slammed the footballer’s wife on Twitter for allegedly making his time on the 2017 series “miserable”.

He tweeted his response to Rebekah’s claims earlier this morning (Thursday August 4) after she was asked by a tabloid whether she is a “bully”.

She replied to the question during an interview with The Sun: “Edited TV looks a certain way. I don’t have anything bad to say about him.”

However, Iain dismissed her claims and insisted he wanted no part in how she presents herself in the press.

He demolished her line in the tabloid chat: “So @RebekahVardy claiming she didn’t bully me because ‘edited TV looks a certain way’.

Read more: Iain Lee says he went to A&E after being “viciously attacked” by an owl

“They can only edit what you do and say. You don’t get to say if I was bullied. You made my time in the jungle miserable,” he alleged.

They can only edit what you do and say.

“Don’t start using me as part of your rehabilitation.”

Rebekah was addressing a series of ‘true or false’ claims with the tabloid following her ‘Wagatha Christie‘ libel case loss to Coleen Rooney.

ED! has contacted a representative for Rebekah Vardy for comment.

During their time on the show, Rebekah and other celebrity participants were accused of ostracising Iain, a late addition to the camp.

Following Rebekah’s departure from the jungle, she came under fire as she claimed Iain, who has spoken about his battles with anxiety and depression, “had a game plan”.

She said in an appearance on spin off show Extra Camp: “I spent a lot of time with Iain. And I was so careful about what I said and what I didn’t say on the VT. But now I am out, I will let it all out.

“He’s got a game plan and I hate people who pretend to be something they are not.”

Rebekah added: “He’s going in there to win. He wanted to play the sympathy card and he’s very much isolating himself from the rest of the camp. And then when the cameras on he’s all limelight.”

Additionally, Rebekah denied she “had a problem” with Iain in her exit interview.

“I had so many conversations with Iain where I tried to pick him up.

“I didn’t have a problem with him. There were no issues, there were no divides in the camp, and I was the one that if he was feeling down I tried to pick him up.”