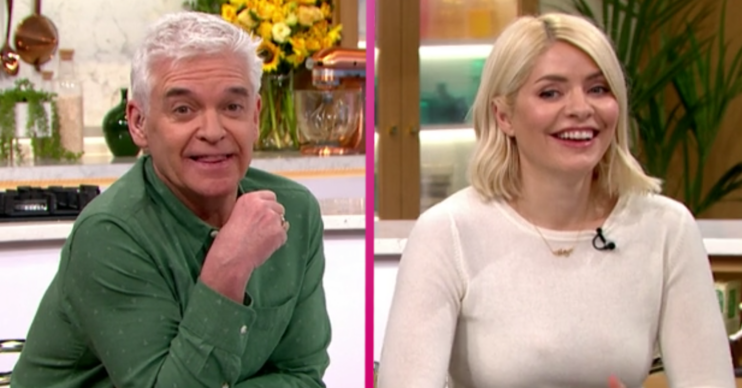 She asked them not to laugh

This Morning hosts Holly Willoughby and Phillip Schofield today (March 3) defied a guest who specifically asked them not to laugh at her phobia.

Nik and Eva Speakman were on the show today to help viewers with their phobias.

The couple ended up speaking to just one caller, a woman named Ingrid, who said she was afraid of hedgehogs.

What did the caller tell This Morning hosts Holly Willoughby and Phillip Schofield?

She then added: “Please don’t laugh.”

Holly and Phil both assured Ingrid they wouldn’t laugh.

Read more: Eva Speakman feared she would ‘die’ after abusive ex landed her in hospital

Ingrid then explained how she felt about hedgehogs.

“It’s been since the year dot, it’s horrible, it ruins my life. I know people laugh but I can’t go out in the summertime because I have to be home by 6.30pm as I know they come out at night.

“I can’t sit in the garden with friends and have drinks because I’m petrified. If I see a dead one on the road I’m in fear and shaking.

“If I see hedgehog poo I won’t go back in that space because I know it’s there.”

What advice did the Speakmans have?

The Speakmans said they could help Ingrid to get over it and asked when it started.

She said that she was watching TV when she wasn’t supposed to as a child and saw part of Not The 9 O’Clock News where they were eating a hedgehog sandwich.

“Looking at it now, do you really think it was a hedgehog sandwich?” Nik asked.

“Well no,” she said, “but they used a real hedgehog for that sketch, I’m sure of it.”

The camera then panned to Holly and Phil.

Holly was seen laughing – despite saying that she wouldn’t – and Phil looked pretty bemused.

Dismissing Ingrid’s claims that a real hedgehog was used in the sketch, he laughed and shook his head as he declared: “No, no, no.”

No we never laugh #ThisMorning pic.twitter.com/TEPa6NOcvg

Phil’s concerned face 😂 how did they keep a straight face. ‘If I see a hedgehog poo I can’t go back in the garden’ what does a hedgehog poop even look like #ThisMorning pic.twitter.com/K9eAmCTrbe

This Morning viewers pulled Holly and Phil up on the comment that they never laugh at guests and pointed to a woman on the show recently with a custard phobia.

“You never laugh???? What about custard woman??” asked one.

“Phil and Holly desperately trying not to laugh. Hence out of shot,” another commented.

“Bloody hedgehogs! All over the bloody place. Can’t move for them!” joked a third.

Another commended Phil and Holly for keeping a straight face for most of the segment.

The viewer added: “How did they keep a straight face?”

What did you think of the phobias phone-in? Tell us on our Facebook page @EntertainmentDailyFix.