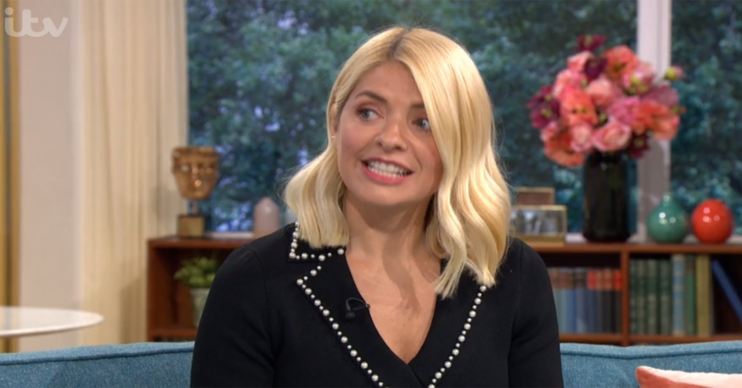 Lisa was getting advice about her sofa

TV’s Holly Willoughby jokingly told Lisa Snowdon to get rid of her partner on This Morning.

Lisa was on Tuesday’s show (April 28) to get some interior design tips from Kelly Hoppen.

Lisa told the hosts and Kelly: “The problem I’ve got is that this sofa that I bought years and years ago… which initially I did quite like.

“But George [my partner] and I are big people and there’s not enough space on this sofa.

“It’s not that comfortable any more either. This sofa is about eight foot wide and I’ve probably got about 10 foot to play with.

“For just me it’s perfect. But George comes in and wants to sit down and there’s no room for him.”

Holly suggested: “Keep the sofa and get rid of George?” as they burst into laughter.

She said: “Dan is working from home and I’ve discovered something I didn’t know before that’s really annoying.

“He taps and types really loudly, there’s no reason to hit those keys as loudly as he does.

“I’m like, ‘Shut up! Don’t do that.’ Especially when he brings the laptop into bed and he’s sat there writing an email.”

TV chef John then appeared on the show to cook banana-stuffed French toast.

He told Holly: “You know you can turn the volume of a laptop keyboard down?”

Holly said: “No!” to which John revealed: “The volume goes down on the keyboard so they don’t make the noise.”

The presenter admitted: “I thought it was the physical tap. Sorry, mind blown.”

Have you noticed anything about your partner in lockdown? Head to our Facebook page @EntertainmentDailyFix and let us know.