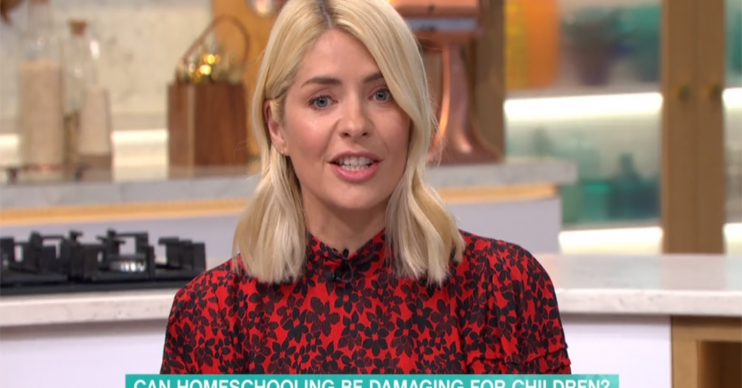 She and Phillip Schofield are keeping two metres apart

TV’s Holly Willoughby got emotional on This Morning over the coronavirus social distancing rules.

On Thursday’s show (April 2), the presenter admitted she’s grateful to still work with Phillip Schofield despite having to be two metres away from each other.

Holly, 39, and Phil, 57, said they miss not having most of the crew in the studio because of the pandemic.

Following a segment with Vanessa Feltz via video call, Holly said: “I miss Vanessa not being in here!”

Phil added: “I miss everyone not being in here. Thank goodness we’ve got each other.

“You’re a long way away but thank goodness we’ve got each other.”

Holly said: “Oh my god, you’re gonna make me cry!” as she teared up.

Last month, Holly and Phil said This Morning was still on air because it’s considered a “necessity” by Government.

On today’s show (April 2), Holly criticised Prime Minister Boris Johnson for not “delivering on promises” amid the outbreak.

“I want to say a special word about testing because it’s so important.

“This is the way through. This is how we will unlock the coronavirus puzzle and how we will defeat it in the end.”

What did Holly say on This Morning?

Sharing her thoughts on Boris’ comments, Holly said: “What is frustrating here is that he’s saying this is the way through, this is the most important thing, this is the key to unlocking it.

“Well, he has the key, he’s the prime minister and yet the promises they’ve made so far they haven’t delivered on.

“You can understand why an awful lot of people are feeling really frustrated and angry about this.”

Meanwhile, later in the show, their Spin To Win segment sparked chaos when it failed to work properly.

Phil explained: “[The wheel] won’t come down. We’re trying very, very, hard to bring it down,” as he grabbed a step ladder.

Holly said: “Oh we’re being told you’re not allowed to go up the ladder.”

However, Phil ignored the Deputy Editor’s request for him to get down and continued to climb the ladder.

Holly exclaimed: “Why isn’t he allowed to go up the ladder? He’s a fully grown man!”

As Phil almost reached the wheel, however, Holly said: “Come down! They’re having a meltdown in there,” referring to bosses.

After that, Holly and Phil revealed they had come up with an idea to still make the game work.

What was the new game?

Phil then reached in and picked out a piece to reveal what the viewer had won.