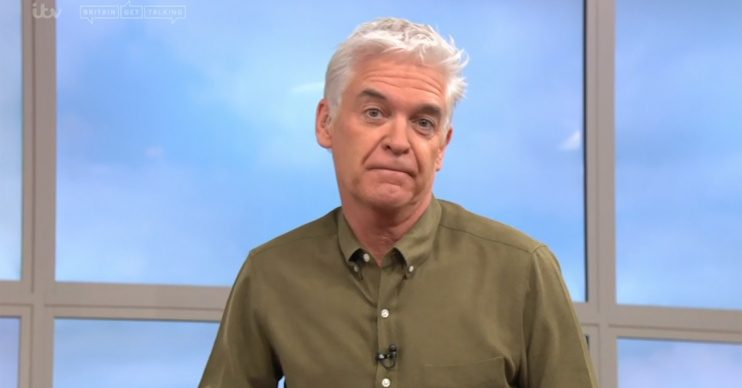 The Spin To Win segment failed to work

The programme’s Spin To Win segment was left in chaos on Thursday’s show (April 2) as the wheel failed to come down from the ceiling.

The wheel has different cash prizes on it and it has to be spun to reveal what a viewer has won.

Returning from an ad break, Holly Willoughby explained: “So you know Spin To Win always goes wrong and every day we find a new way for it to go wrong.

“Well, today it has gone wrong big time. What has happened Phil?”

Phil said: “Well, [the wheel] won’t come down. We’re trying very, very, hard to bring it down,” as he grabbed a step ladder.

“I reckon I could get that,” as Holly said: “Open the ladder and see. Can you be careful please.”

Holly said: “Oh we’re being told you’re not allowed to go up the ladder.”

Phil said: “I know I’m being told not to go up the ladder but one step.”

Holly exclaimed: “Why isn’t he allowed to go up the ladder? He’s a fully grown man!”

Phil gets told off by This Morning bosses

Phil said: “What do you mean health and safety in a world we’re living in at the moment!” as bosses spoke through their ear pieces.

“You’re worried about me going up a ladder?”

However, Holly teased: “Go up one more step and see what happens. Can you reach it?”

Phil said: “Still can’t reach it but I could spin it if I had something to spin it with.

“The Deputy Editor is going into a meltdown,” as he naughtily took one more step.

He added: “When I do this at home, the Deputy Editor is not there to tell me to stay safe.”

When I do this at home, the Deputy Editor is not there to tell me to stay safe.

Holly said: “You’re nowhere near it. One more [step].”

As Phil almost reached the wheel, however, Holly said: “Come down! They’re having a meltdown in there,” referring to bosses.

“It’s already stressful enough without you being up a ladder.

“Shall we go to a competition or something,” as the pair revealed what was coming up on the rest of the show.

After that, Holly and Phil revealed they had come up with an idea.

What was the new game?

In conclusion, one viewer called in and Phil reached into the cup and picked out a piece of paper – revealing the fan had won £1,000.

Do you enjoy watching Spin To Win? Leave us a comment on our Facebook page @EntertainmentDailyFix and let us know.