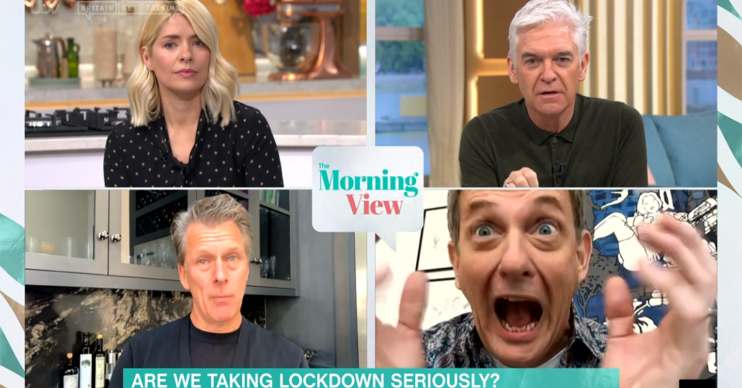 Matthew Wright has voiced his anger on This Morning over Brits who are still not self-isolating amid the coronavirus pandemic.

The presenter appeared on Wednesday’s show (April 1) and discussed the issue with hosts Phillip Schofield and Holly Willoughby.

Despite Prime Minister Boris Johnson enforcing a three-week lockdown in the UK, people are still meeting up with friends and neighbours and having gatherings.

What did Matthew say on This Morning?

Matthew said: “I think it’s an ongoing problem with mixed messages coming from our leaders.

It’s getting to the point where I’m getting very angry about people who aren’t self-isolating.

“The reality is, these are extraordinary conditions and we have to stay at home.

“I haven’t been out of this house at all now for three days. We’re going to walk the dog later, we have a neighbour who walks the dog.

“It’s getting to the point where I’m getting very angry about people who aren’t self-isolating.”

Earlier in the show, Phil vented over NHS staff not being given enough personal protective equipment (PPE).

Deputy Chief Medical Officer for England Dr Jenny Harries recently admitted there had been issues with the deliver of PPE.

Phil said on today’s show: “What the hell is that all about?”

Guest Dr Phillipa Kaye said: “It’s sad and actually really disturbing because we are asking our health care professionals of all times to put themselves out there on the frontline at risk.

“Risking themselves, risking their families. It’s outrageous quite frankly.”

“People would volunteer. If they need volunteers to drive this stuff somewhere then why isn’t there a call out for them.

“We are all in this together, everybody is trying their best and sometimes you make a mistake and there’s nothing wrong with saying, ‘I made a mistake.’

“But when it comes to something like this you don’t want to point the finger but just doesn’t seem good enough.”

The Chase: Calm down, people, Bradley Walsh is NOT leaving!