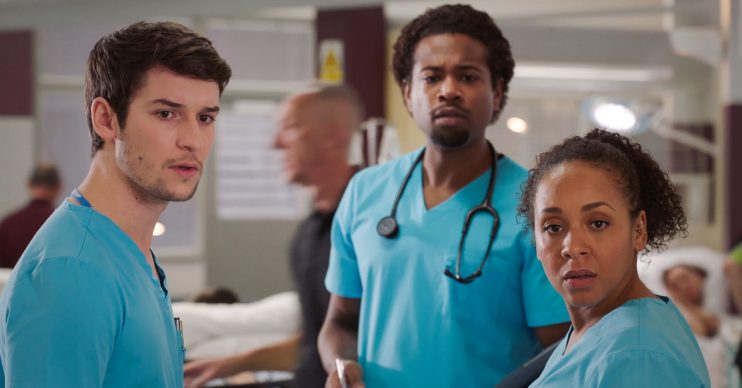 Cameron has done some questionable things in recent weeks!

It looks like the net is closing in on Cameron as Zav uncovers his secret in this week’s Holby City.

With the hospital still in crisis and short staffed under CEO Max McGerry’s reign of terror, Cameron offers to do a risky procedure in the hope of impressing his bosses.

However Zav, who has had his suspicions about Cameron for a while, insists the junior doctor is out of his depth and he wouldn’t be considered if it wasn’t for the lack of staff.

But Ange gives Cameron the go ahead thinking he is capable of performing the operation.

However, Zav grows sick of Cameron’s self-important behaviour and is thrilled when he discovers a huge secret about Cameron.

What has he discovered? Are Cameron’s days numbered?

Meanwhile, the walls look to be closing in on Cameron when Chloe reveals Evan’s sister Phoebe has been in touch with her about his life insurance money.

Chloe tells Cameron there is going to be an investigation into Evan’s death and the junior doctor is immediately panicked.

Is the truth about Evan’s death going to come out?

Viewers know that Cameron didn’t help rapist Evan as he laid dying and even made sure no other member of staff could come to his aid.

As a result, Chloe’s abusive husband died in hospital.

However, since Evan’s death, viewers have started to see more of a dark side to Cameron.

A couple of weeks ago he threatened Steve, who had been blackmailing his friend Nicky, leaving viewers convinced he was going to become a serial killer.

He then went on to take credit for an emergency procedure in the hospital’s elevator, which was performed by porter Jason.

But what has Zav found out about Cameron, and will he tell everyone his secret?

What do you think Zav has discovered? Leave us a comment on our Facebook page @EntertainmentDailyFix and let us know what you think!