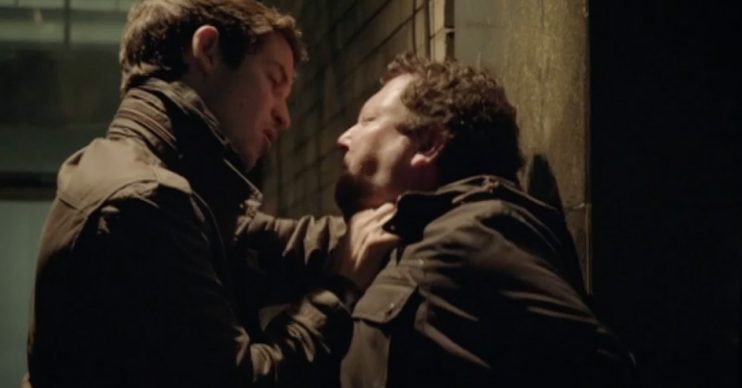 The menace in those eyes!

Valentine’s Day came early to Holby, but there was desperation rather than love in the air for Nicky.

Evil Steve, the man who blackmailed her into handing over money after her uninsured mum injured him in a car crash, was back.

And he wanted a lot more cash!

Steve even started stalking Nicky at work, threatening to report her to boss Jac, if she didn’t pay up.

After already stooping as low as pawning a precious necklace that belonged to Cameron’s late mother, Nicky then found herself doing something wholly unethical.

A patient called Harry came into the hospital with a heart condition and was advised he needed surgery, but it was non-urgent.

However, he was desperate to get the operation done so he could fly to India to be with his dying father.

Harry managed to persuade Nicky to get him prioritised in exchange for money on the sly.

Against her better judgment, Nicky agreed and coached him on all the right things to say to Jac.

Although Jac was suspicious that he was now presenting with symptoms of unstable angina, she approved the emergency operation.

Nicky was terrified when it appeared he might die on the operating table; monopolising Jac’s time to help meant another patient being operated on by Chloe at the same time was also at risk.

Although both patients survived, Nicky was wracked with guilt that she could have cost someone their life through her lies.

The young doctor felt so bad that she refused to take the money from Harry.

She then came clean to Cameron, admitting that she had pawned his mother’s necklace; although angry, he agreed to help.

Cameron confronted Steve, outed him as a drug addict and menacingly threatened him.

“I hate people who play victim,” Cameron told him, as he tightly gripped his throat. “You think I can’t see you’re an addict. What’s your drug of choice, huh? Coke? That would explain the jitters and the sweating.

“Tell me how much do you owe the dealer? Let me guess… £1500? Or were you after your next hit? You are pathetic, you’re a waste of space.”

As the blackmailer scurried away with his tail between his legs, Cameron reassured Nicky that her nightmare was over, but he then said something that left a chill…

“Don’t do it again. You want me fighting your corner, trust me,” he muttered.

Viewers were shocked by his behaviour; since he let his now-girlfriend Chloe’s ex, Evan, die in his hospital bed, his behaviour has grown more threatening.

Even his attitude towards Chloe is a concern; he’s appearing besotted at the moment, but he is also clearly controlling and it could turn nasty.

Some fans are even convinced he’ll develop into a serial killer!

Cameron – serial killer klaxon. It would seem his dark side is showing. #HolbyCity

Holby City returns to BBC One next Tuesday at 8pm.

Do you like Cameron as a baddie? Leave us a comment on our Facebook page @EntertainmentDailyFix and let us know what you think of this story.