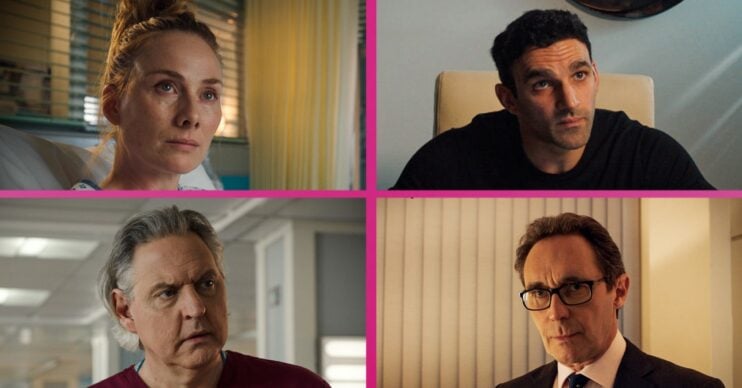 Holby is coming to an end

Holby City has released a trailer for the final episode of the medical drama.

Tomorrow (Tuesday, March 29) the BBC medical drama will come to an end after 23 years.

As the show prepares to finish there are still some major storylines that need to conclude.

And this new trailer has made that all the more clear.

Here are six questions that need resolving in the show’s finale!

1. Is Jac going to die? Can Elliot save her?

Jac has a brain tumour and last week (Tuesday, March 22) viewers saw her go into surgery as Elliot attempted to remove it.

Before the surgery, she asked her good friend not to let her wake up if it wasn’t successful.

After the operation, Jac did wake up, but Elliot told her the tumour was bigger than they thought and he couldn’t let her die.

As they both cried, Elliot told her he would find something.

Will he be able to save her, or will Holby fans have to say an emotional farewell to the legendary Jac Naylor?

2. What will happen to Fletch and Sacha?

The whole hospital was rocked when they learnt of Jac’s tumour and her friends Fletch and Sacha are among those who are determined to help save her.

The trailer revealed old clips which showed Jac’s growing friendship with both men.

Viewers know Fletch and Sacha have both had conflicts over Jac’s health, but will they pull together for their friend?

3. Will Russ return for Hanssen?

Earlier this year, Russ was surprised when his daughter Billie gave birth.

Russ was later shocked to find she planned to move to Leeds with her baby and she didn’t want her father to come with her.

As Russ confessed his feelings to Henrik, he told him that it was a fantasy.

But it was clear he was only doing this so Russ would put his daughter first.

Will Hanssen and Russ get another chance?

4. Will Eli and Amelia get their happy ending?

Fans know Eli and Amelia have been desperate to start a family for a long time.

Unfortunately the couple haven’t had any luck and Amelia recently suffered a miscarriage.

But in last week’s episode Eli and Amelia told Jac the happy news that they’re expecting.

Will they finally get their happy ending?

Over the last few months, we’ve seen the return of many Holby characters including Elliot and even Essie and Arthur, who appeared to Jac in a dream.

Could there be some more big returns for the last episode?

6. Is Holby City ever coming back?

Holby fans were left gutted last year when it was announced the show was coming to an end.

Although it looks like it is completely finished, fans are already calling for it to be brought back.

I pray for a miracle cure for Jac in the hope that another sensible TV channel may bring back #HolbyCity for the millions of loyal fans. No need for a TV licence after next week as @BBCHolbyCity is the only thing I watch 😡

The show will be back #HolbyCity

They brought back Waterloo Road so I will never give up the hope of a #HolbyCity return one day. pic.twitter.com/yz9hQI1qHa

Tonight is the penultimate episode of #HolbyCity (ever, unless someone sees sense and brings it back). https://t.co/oEMaIfZIiZ

Last year the BBC confirmed it was bringing back school drama Waterloo Road eight years after it was axed, so it looks like there could be some hope for the show to return one day.

However it looks like for now this is goodbye.

Will you be watching the final episode of Holby City? Leave us a comment on our Facebook page @EntertainmentDailyFix and let us know what you think of this story.