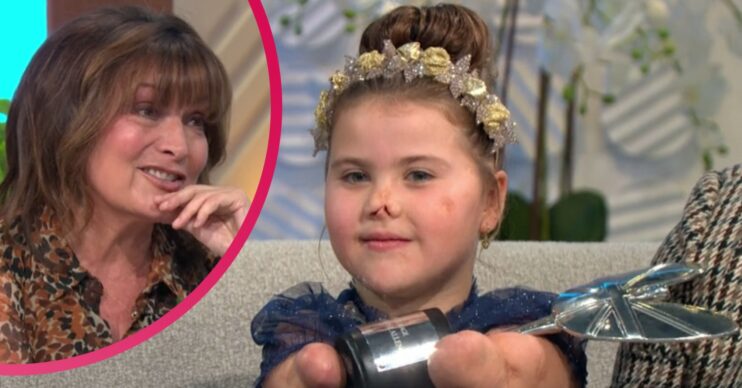 Harmonie-Rose Allen is a Pride of Britain winner

The seven-year-old girl from Bath has been named a Child of Courage as part of 2021’s Pride of Britain awards show.

And, ahead of the ceremony airing on ITV tomorrow night, Lorraine viewers were inspired by seeing Harmonie-Rose on TV.

Indeed, many expressed on social media how the young quadruple amputee had “brightened up their day”.

Why is Harmonie-Rose Allen a Pride of Britain winner?

Harmonie-Rose was just 10 months old when she first fell ill. Her limbs turned black and doctors were forced to amputate after meningitis damaged her legs, arms and the tip of her nose.

Even then Harmonie-Rose was only given a 10% chance of survival.

Ten operations later, the remarkable Harmonie-Rose has raised tens of thousands of pounds for charities. She also loves writing and drawing, as well as swimming, dancing and gymnastics.

What did Harmonie-Rose Allen say on Lorraine?

Harmonie-Rose also charmed host Lorraine Kelly and PoB presenter Ashley Banjo, as well as viewers, as she joined them in the studio.

Asked about the Pride of Britain do, Harmonie-Rose – who met celebrities such as Peter Andre – revealed with glee she had stayed up until 1am.

She also joked about dressing up for the bash: “I love a bit of bling.”

She brightens up the dullest of days.

Lorraine was wowed by Harmonie-Rose, telling her mum Freya: “You must be so blinking proud.”

How Lorraine viewers reacted to Harmonie-Rose and her meningitis battle

Many of those watching at home noted on social media how blown away they were by Harmonie-Rose.

One person wrote on Twitter: “I’m gonna watch Pride of Britain just to see that lovely little girl. Her parents must be so proud. I’d want to spoil her every day.

“Brightened up my whole week seeing her lovely face. Actually can’t get over how sweet she is #Lorraine.”

Another person echoed: “Harmonie-Rose is the most special little girl. She brightens up the dullest of days. #Lorraine.”

Others enthused about being inspired by Harmonie-Rose.

“That little girl is absolutely beautiful! She’s amazing,” someone else wrote.

“I hope she goes super duper far in life, all the way to the top of the world #Lorraine.”

Another Twitter user added: “Harmonie-Rose is much wiser than her years. Such a grown up, intelligent little girl for almost eight. Her mum must be so incredibly proud. #Lorraine.”

And yet another person contributed: “What an amazing, special, confident, beautiful, inspirational little girl you are Harmonie-Rose.

“All these celebrities should be honoured to have met you sweet girl, you are truly amazing #Lorraine.”

The Pride of Britain Awards will air on ITV on Thursday November 4 at 8pm. Lorraine airs on ITV, weekdays, from 9am.