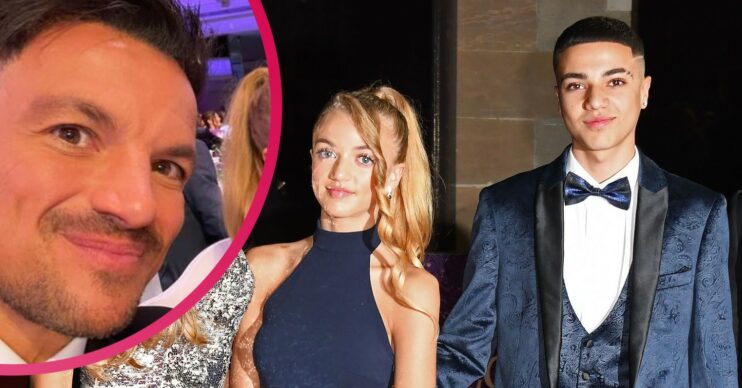 Peter joked it'll be the last time Princess 'glams up'

Peter Andre was joined by his children Junior and Princess as they hit the Pride of Britain red carpet last night (Saturday October 30).

The siblings attended the charity bash at Grosvenor House in London alongside dad Peter and his wife Emily MacDonagh.

But despite turning heads with their glamorous looks, Peter couldn’t help but tease daughter Princess about her red carpet debut.

What did Peter Andre say about Princess Andre and Junior Andre?

Speaking to Hello! magazine at the star-studded event, Peter revealed: “This is Princess’ first red carpet.”

He went on to joke: “It’s also the first and last time she’ll ever be glammed up!”

But despite his good-natured ribbing, it was clear dad Pete was bursting in pride himself over his 14-year-old daughter and son, 16.

On his Instagram account Pete shared a host of press images, with many focusing on his two eldest.

One image of Junior and Princess posing for the cameras was captioned with a heart emoji: “Brother and sister.”

What did Peter Andre and Emily MacDonagh wear at Pride of Britain?

Not to be outdone by younger members of their family, Pete and Emily were also dressed to the nines.

Emily, 32, looked stunning in a sleeveless floor-length silver gown. She also wore her hair swept over her shoulder.

And Pete echoed his son’s blue suit and bow tie style with a three-piece black tie and suit.

Fans loved seeing Junior and Princess on the red carpet as one gushed: “Princess is stunning and Junior [is] so handsome.”

Another said: “You would think Princess is Emily’s daughter – so alike.”

A third added: “Beautiful family. I can’t believe how grown up Junior and Princess look.”

What did the Andres say about the Pride of Britain awards?

On Instagram, Pete urged his followers to watch the Pride of Britain awards when the ceremony airs on Thursday (November 4).

Pete wrote: “Wait until you meet Harmonie next week.”

Winners are nominated by the public and come from all walks of life from across the country.

The Daily Mirror Pride of Britain Awards will air on ITV on Thursday November 4 at 8pm.