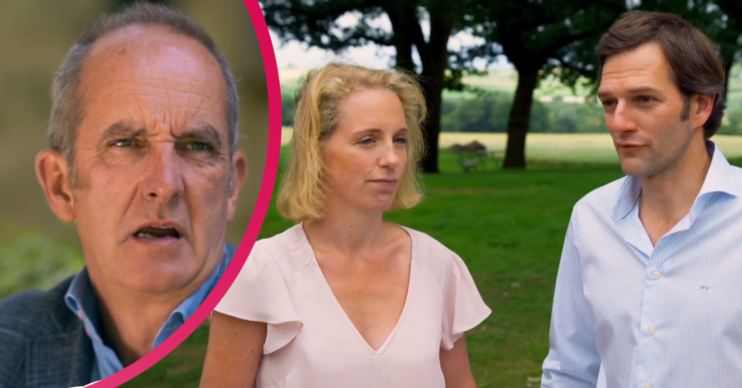 Some thought the roof space looked particularly unsafe for youngsters

Viewers were stunned last night as they watched a family turn a folly into what they thought looked like a “death trap” of a home on Grand Designs.

Wednesday (July 15) evening’s repeat episode featured architect Jaime and his wife Mimi Fernandez, who embarked on an ambitious project to transform a dilapidated castle-like structure into a family home.

What happened on Grand Designs?

The building, hundreds of years old and known as a folly, was in need of some serious repairs. But the couple had incredible plans to turn it into an unusual residential property.

Jaime was an architect, while Mimi, a former teacher, looked after their son, George who was nearly two. Their family was soon to grow, too, as she was five months pregnant with their second child.

Their folly property was originally built to house a gentleman’s fossil collection. Host Kevin McCloud explained: “It’s a building that doesn’t want to stand up any more. It just wants to sort of fall over, into two big halves!”

Their overhaul included the original stonework and featured new, more modern bricks, all exposed, as Jaime didn’t want to plaster over it.

The building also had several spiral staircases with a rope handrail, taking visitors from the ground-floor kitchen, up into a living space, then to the bedrooms and finally an open rooftop.

Kevin said, as they stood at the very top, level with the surrounding trees: “I do like this space up here. There’s something about being up in the canopy.”

“Such a peaceful space to be,” said Mimi, who compared it to being in a tree house.

But on Twitter, a number of those watching at home thought the property appeared somewhat unsafe for children, with its exposed brickwork, spiral stairs and rooftop space, which was surrounded by a low wall.

A death trap for kids.

One said: “The folly on #granddesigns is lovely but I can’t help worry on behalf of the two young kids living in it.”

Another wrote, bluntly: “It’s a death trap for kids. #granddesigns.”

“I was wondering how many baby gates they would need plus the agony of getting a baby and toddler up those front steps!” said a third.

Someone else tweeted, sarcastically: “Nothing says child safe quite like a spiral staircase and exposed brickwork.”

A fifth said: “#granddesigns oh Jesus, that wall on the roof is so not child safe!”

“We said the same thing!” agreed another.

The folly on #granddesigns is lovely but I can’t help worry on behalf of the two young kids living in it.

I was wondering how many baby gates they would need plus the agony of getting a baby and toddler up those front steps!

– Grand Designs is available to watch now on Channel 4‘s streaming platform, All4

What did you think of the unusual family home? Leave us a comment on our Facebook page @EntertainmentDailyFix and let us know.