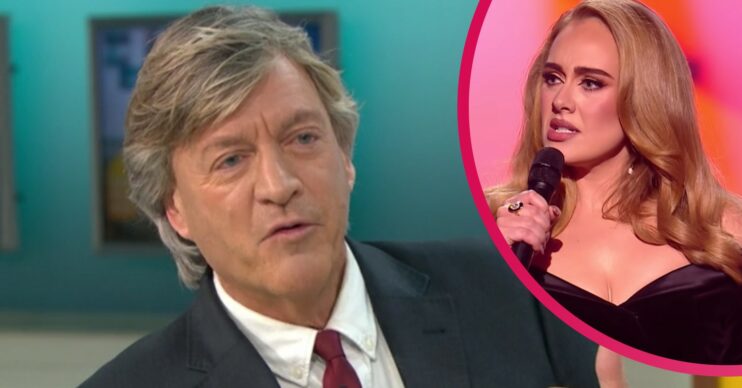 The musician stole the show at the BRITs last night

Good Morning Britain viewers have rushed to complain over the show’s coverage of Adele today (February 9).

Fans of the ITV programme took issue as Susanna Reid and Richard Madeley discussed the musician’s appearance at the BRITs.

At one point, the presenters were joined by Strictly‘s Rhys Stephenson as they spoke out about Adele’s engagement speculation.

The star sported a huge diamond on her engagement finger as she took to the carpet on Tuesday.

Rhys responded: “Why else would you wear it on that finger?

“You know the etiquette of the UK and what we all assume. Maybe she’s having fun with us or maybe she’s given a subtle bit of information.”

The trio went on to discuss Adele taking home three gongs at the music ceremony.

Rhys, who is a super fan of the singer, commented: “I love it when Adele wins anything – she only deserves the best!”

It's the question we're all asking after she wore a HUGE diamond to the #BRITs pic.twitter.com/TfPQpg3uGo

Meanwhile, Richard Arnold spoke about the singer during his BRIT Awards round-up.

However, some viewers took issue with the excessive coverage.

How did GMB viewers respond?

On Twitter, one complained: “Anyone else getting sick of the self obsessed Adele coverage? #TheBritAwards #GMB.”

Another added: “FFS @GMB are STILL banging on about Adele.”

A third poked fun: “Another hot topic for your presenters to discuss. How long it’s been since the PM has done an interview on your show?”

FFS @GMB are STILL banging on about Adele. Arg.

Anyone else getting sick of the self obsessed Adele coverage? #TheBritAwards #gmb

Another hot topic for your presenters to discuss 👏🏼 remind me again how long it’s been since the PM has done an interview on your show?

@GMB all theses morning shows pretend their interested in so called serious news but your not your all only interested in tupencehapney rubbish e.g Adele’s ring – the over payed cat kicker –

A fifth tweeted: “Who really cares if Adele is engaged or not ffs?”

Another complained: “@GMB all these morning shows pretend their interested in so called serious news but your not your all only interested in rubbish e.g Adele’s ring.”

One wrote: “That means more depressing songs if she’s engaged.”

Furthermore, a second speculated: “She’s preparing for her next album.”