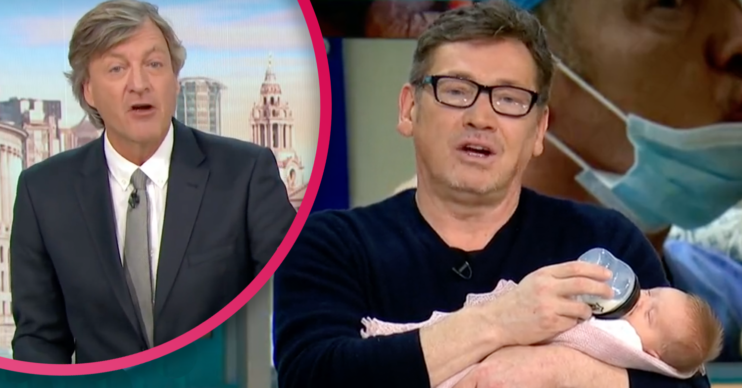 She was born four weeks early

However, some viewers called out Richard’s questioning of the couple, who went through a pretty harrowing time when Skye was born.

GMB: What did Sid Owen say about his baby?

EastEnders star Sid opened up about becoming a father for the first time.

Sid – who played Ricky Butcher for 24 years on the soap – held baby Skye as Victoria explained how she was admitted to hospital for an emergency C-section four weeks before her due date.

Susanna said: “You went through a really tough time.”

Victoria confirmed: “Yes, it was all a bit of a shock.”

Richard added: “It was touch and go, you almost weren’t with us. You nearly bled to death.”

Victoria then spoke about her condition, placenta previa, and how much blood she lost.

She explained: “It’s blocking the womb, basically. I woke up and I thought there was a little bit of blood, and then I went to make the bed and pull it back, and it was covered, so it was a bit of a shock.”

She then had a blood transfusion of two litres.

Richard also asked Sid how it felt being a father for the first time.

Sid replied: “Amazing. I couldn’t stop looking at her for three, four days, crying my eyes out! It is a miracle. I don’t regret not having them younger, I got the partying days out of the way and now I can really appreciate it.”

Richard came under fire – both for interrupting and for what some interpreted as a flippant turn of phrase considering the severity of Victoria’s condition.

“Richard let them speak!” slammed another.

“‘You nearly bled to death’  way with words, Rich #GMB,” said another.