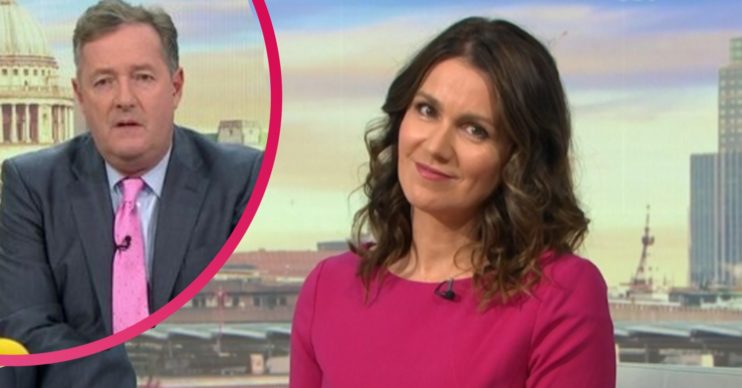 As the show began, Piers stumbled over his words and had to take a moment to clear his throat, much to Susanna’s amusement.

The incident led Piers to admit to viewers that he had been given an unusually high reading for the last two days in a row when having his temperature checked.

What did Piers Morgan say about his temperature?

“The weird thing is we have these temperature check machines in the building,” explained Piers before beginning to cough.

“Sounds like you need one!” joked Susanna as the crew began to giggle.

Piers continued: “For the last two days the machine said ‘not admitted’ and it said my temperature was 37 point something.

“Both days we’ve identified the problem. It turns out there’s a big heater on the door and it was putting heat on me as I stood there to get checked!”

Susanna added: “So you’re sweating under this heater!”

What did Piers Morgan say about Donald Trump’s coronavirus diagnosis?

“He must have felt very rough 20 years ago!” exclaimed Piers in response to Trump’s bizarre claim.

Dr Hilary suggested that Trump could in fact be feeling the effects of the drugs he’s been taking over the last few days.

“They can cause some euphoria. Anyone that takes these will feel a surge in energy. It’s a very dangerous and misleading statement to make publicly,” he said.

“He’s in total denial about the dangers of COVID-19,” added Dr Hilary.

Piers then exclaimed: “This is all very serious and yet trump thinks he’s a superhero and in a Gerard Butler movie.”

“You’ve got Covid and your doctor is a total disgrace and lying through his back teeth to the public!” he added. “This has highlighted all the bad stuff in Trump.”

“He wants to be seen as a tough guy superhero!”

What has Trump said about his condition?

He went on to tell Americans not to fear the disease in a tweet before he left hospital on Monday evening, saying: “I feel better than I did 20 years ago!!”

“Will be back on the campaign trail soon!”

In a video message later shared on his Twitter account, he added: “We’re going to be out front. As your leader, I had to do that. I knew there’s danger to it, but I had to do it. I stood out front, and led.”

Good Morning Britain is on ITV every weekday from 6am.