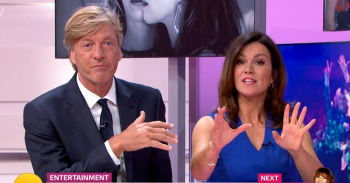 It happened midway through an interview

Susanna Reid and Richard Madeley rushed to reassure Good Morning Britain Viewers after a loud bang was heard in the studio.

During Tuesday’s show, the pair were interviewing Bananarama about their comeback when a number of loud crashes rung out through the studio.

As Richard started to quiz the band on the difference between being a celebrity now compared to their 80s fame, he was cut off by the clatter.

Stunned by the noise, Richard said: “We have no idea what that was…”

Susanna quickly added: “I’d just like to point out it sounds like something falling down and hopefully no one [is] injured as a result. We’re just going to look into that…”

The pair then continued their chat with Bananarama members Sara Dallin and Keren Woodward.

Susanna returned to the daytime show today after her Easter break.

Richard was filling in for Piers Morgan as he continues his break in America.

However, viewers were gutted that Piers wasn’t back and shared their thoughts on Twitter.

One person said: “We need Piers back, no disrespect to Richard but Piers has more about him.”

At the weekend, Piers shared a snap from John F. Kennedy International Airport as he arrived in New York.

The presenter wrote: “Good to be back in the Big Apple. #NYC.”

Meanwhile, during today’s Good Morning Britain, Richard made a joke about Susanna’s age during a discussion about whether it was possible to be a good parent and consume alcohol in moderation.