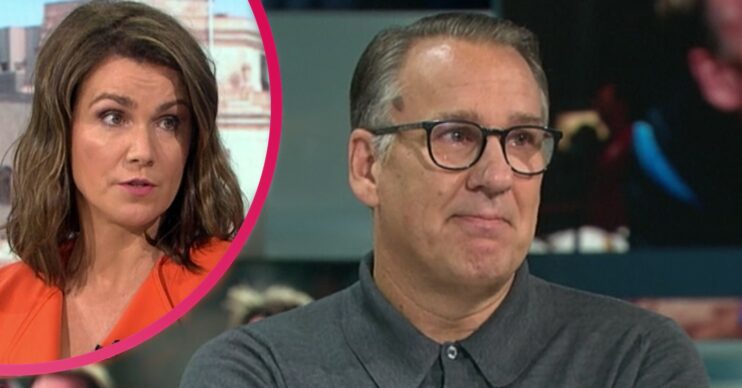 Paul opened up on the show today

GMB viewers praised Paul Merson after he teared up on today’s show (September 14) describing the effects of his gambling addiction.

The former footie star, 56, recalled the darkest moments of his illness, which saw him squander his £7 million fortune during the 1990s.

What did Paul Merson say on GMB?

In an emotional appearance, Paul – in to plug his new autobiography Hooked – heard Susanna Reid read a letter he had written himself during last year’s lockdown.

It was during the lockdown in 2020 that Paul relapsed.

“I need to stop gambling,” it said.

“I love my wife and kids and I’m so happy with them.

“When I was in Orlando with my wife and two little children it was the happiest I have been in years because I wasn’t gambling, I hate myself when I gamble! I hate it.

“Please help me God. I need to pay everyone back and get my wife and kids a house. God help me.”

Hearing back the words, Paul became upset and teared up.

Paul Merson: “Addiction talks to you”

He continued: “It is sad. In lockdown it was scary, you’re watching it and my brain was telling me I’ve saved enough money to get a deposit for a house, to get us out of rented accommodation and watching the news…

“As an addict, I have to keep on watching stuff and the news was blowing my mind.

“Addiction talks to you, and it’s like ‘we’re not getting out of this. We’ll be in lockdown forever, this is it. We need a house and the only way we’re going to do that is chasing the money’.

Well done @PaulMerse for speaking so bravely on #goodmorningbritain this morning. My first football hero! Always will be my hero!! #afc Paul Merson = icon – more than a footballer.

Total respect to Paul Merson for having the balls to speak up. He’s a broken man who needs help. #GMB

How did viewers react to Paul’s moving depiction?

During Paul’s moving and powerful testimony of gambling, viewers got in touch to praise his courage.

One wrote: “Well done @PaulMerse for speaking so bravely on #goodmorningbritain this morning.

“My first football hero! Always will be my hero!! #afc Paul Merson = icon – more than a footballer.”

Another said: “Paul Merson on @GMB hard to watch a man addiction, he’s very brave that was powerful! I hope it helps others.”

A third commented: “Total respect to Paul Merson for having the balls to speak up. He’s a broken man who needs help.”