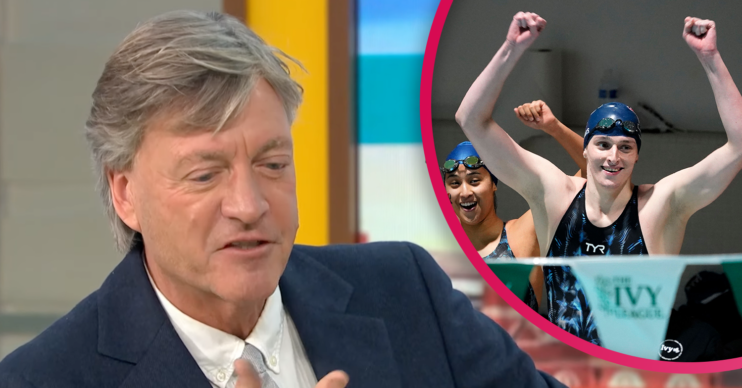 Where was the trans representation?

GMB came under fire today (April 12) after what some viewed as a “one-sided” debate about trans women athletes.

American swimmer Riley Gaines appeared on the show to discuss her recent race against Lia Thomas, a trans woman athlete.

Both finished in fifth place and it sparked a huge debate about whether biologically male athletes who have transitioned should be allowed to compete against biological women.

As a result, the GMB debate sparked a huge reaction on Twitter, with some calling out host Richard Madeley‘s “loaded” questions.

Not only that, but viewers were unimpressed by the fact that someone from the trans community wasn’t called upon to put over the other side of the argument.

On the show today, swimmer Riley Gaines explained how she felt when she tied in a race against trans athlete Lia Thomas.

Riley said: “There is a fine line and I want to be respectful of everyone, but we did tie for fifth place and it was this flood of emotions.”

During the interview, Richard declared: “He, when she was a he, was 500th down the list as a competitive swimmer.

“Now as a woman Lia Thomas is number one.”

Later in the interview, he asked: “Was your gut feeling this isn’t fair?”

“Your sporting authorities in America have told you to not talk about it. They want to suppress discussion about this don’t they.”

“For sure,” she replied.

Co-host Ranvir Singh did, however, put across the other side of the argument.

She explained that in certain sports across the world, trans women undergo tests and if there is a “massive disparity” they don’t compete against biological women.

She also pointed out that nothing is actually proven when it comes to testosterone levels in trans women athletes.

And, she said, some argued that it would be “really discriminatory to stop trans women from competing”.

GMB fans on Twitter were divided over the debate.

One said: “Did Riley Gaines win? No she didn’t. Did Lia win? No they came joint fifth.

“If we want to go back to old-school women should be not competing at all – we shouldn’t have LGBTQ rights. These debates are stupid.

“Transgender women should be treated as equals,” they concluded.

“Why is this even a debate?” asked another.

“Trans women ARE women. They deserve the same opportunities as every other woman. If you disagree with that, then you honestly do not believe in women’s rights and trans rights.”

Transgender women should be treated as equals. Why is this even a debate?

However, many didn’t agree with that sentiment.

One said: “It’s not a tricky debate to have. No one is banning trans women from competing, they’re saying that biological males shouldn’t compete against women. That’s all.”

“It’s not discriminatory to stop trans women competing against biological women. It’s just ridiculous to say it is,” said another.

However, others admitted it “didn’t seem right” there was no trans representation in the debate.

“It doesn’t seem right that there’s only one side of this very important and sensitive debate being discussed,” said one.

“We should have someone from the trans community etc to put their side forward.”

Another agreed: “Where is the trans representation? Alan Partridge asking loaded questions.”

A third commented: “Is this a fair segment? A one-sided conversation about an extremely sensitive subject.

“Surely we should have an expert or trans woman to put their side forward also? Talk about biased reporting,” they added.

“Exactly, it’s one sided, at least have a transgender person or someone with actual facts instead of this biased anti-trans conversation,” another said.

However, one viewer responded and said: “Not at all, Ranvir has put the other side across very well.”

So what did you think of today’s debate? Tell us on our Facebook page @EntertainmentDailyFix.