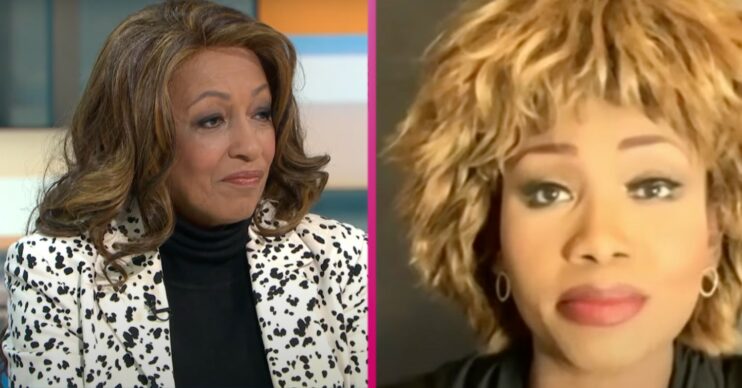 Her comments came under fire

GMB viewers were left shocked today by comments American singer, Sheila Ferguson made on this morning’s edition of the show (Thursday 18 November).

Sheila Ferguson, 74, appeared on Good Morning Britain today to discuss the reason why she doesn’t like tribute acts.

Sheila’s appearance came after it was reported that Tina Turner is suing a singer for being ‘too similar’ to her.

Tina is taking 30-year-old Dorothea ‘Coco’ Fletcher, who performs in an unofficial show called Simply the Best, to court.

Sheila agrees with what the 81-year-old singer is doing as she appeared alongside Dorothea.

The former The Three Degrees singer didn’t hold back when she was sharing her thoughts on Dorothea.

“Her vocals aren’t as good as Tina, number one. Impersonating Tina Turner is a no no, that’s number two,” she said.

Dorothea argued that tribute acts were fan-driven, but Sheila was quick to fire back.

She said: “I have nothing against you personally or any artist trying to make a living doing anything, it’s just that if you can sing, then you find your own lane to be in. You’re good enough to sing on your own, why do you have to impersonate Tina?”

What were Sheila’s comments on Good Morning Britain?

Sheila was asked if her dislike for tribute bands and acts comes because she has ‘personal experience’ of being impersonated.

“She was ugly, she looked like a dog,” she said of her tribute act. She then went on to explain how she kept on being mistaken for the impersonator while she was in Majorca.

“It kept coming up when I was going out and that’s when I realised I had to do something about it,” Sheila added.

What did GMB viewers have to say?

Good Morning Britain viewers were not happy at all with Sheila’s comments on the show today. Many took to Twitter to voice their disgust.

“Sheila Ferguson calling an impersonator of herself a DOG and UGLY is just VILE and I hope your next tour fails,” a third snapped.

Other viewers were quick to praise the 74-year-old. One wrote: “Sheila Ferguson is the type of person to slap you with two back-handed fingers. She came in with THAT energy and I love it.”

It looks as though Sheila won and lost a few fans after her controversial Good Morning Britain appearance today!

What did you make of Sheila’s controversial comments? Leave us a comment on our Facebook page @EntertainmentDailyFix and let us know.