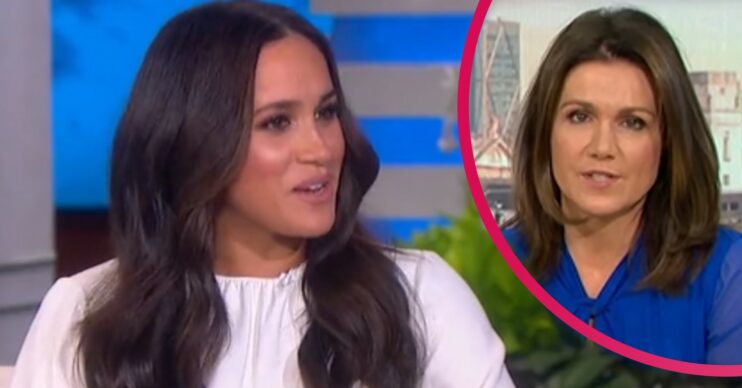 The duchess was centre of some discussions

Good Morning Britain has been accused by viewers of being ‘obsessed’ with Meghan Markle following a discussion about her upcoming appearance on the Ellen Show today (Thursday 18 November).

Viewers of Good Morning Britain were also stunned by Susanna Reid‘s apparent U-turn on her opinion of the Duchess of Sussex.

Why was Meghan a topic of discussion on Good Morning Britain?

Meghan’s upcoming appearance on the Ellen Show has been the subject of some debate recently. Yesterday (Wednesday 17 November), Ellen Degeneres posted a short clip of her interview with Meghan on her Twitter. It received a very mixed reaction from viewers.

Speaking about the interview, Susanna said: “The last time we saw Meghan on a chat show, she was doing the big reveal on Oprah.”

“That was quite a quiet affair, wasn’t it? The fall-out from that one,” Ben Shephard joked.

“Goodness me. She put a rocket under practically everything, frankly, from the Royal Family to this programme,” Susanna recalled.

What did Susanna say about Meghan?

A tweet from a viewer was read out by the hosts. The tweet suggested that Meghan should not do interviews if she doesn’t want to be in the spotlight.

Susanna then said: “I find that, you know, it’s getting increasingly hard to defend them.”

This came as a shock to many viewers, as at the time of the Oprah interview, Susanna was one of those who defended the royal couple.

The Good Morning Britain host went on to say: “Their explanation is, they didn’t want the kind of media coverage, the endlessly critical media coverage that they were getting, and with the undertones that Prince Harry and Meghan said that was around it.

“That they almost wanted to take back control, didn’t they?”

“It’s got a ring to it, that phrase,” Ben quipped.

“And look how well that’s worked out,” Susanna laughed.

What did Good Morning Britain viewers have to say?

Good Morning Britain viewers on Twitter were quick to voice their irritation about the show speaking about Meghan.

“GMB are just as obsessed as Piers Morgan is with Meghan Markle. Just leave her alone,” one viewer snapped.

“ITV, why do your morning shows spend so much time talking about Meghan Markle? None of it is ever newsworthy & just makes you look obsessed, it’s weird,” another said.

“ITV really are weirdly obsessed with Meghan Markle, they seem incapable of going a week without talking about her,” the same viewer tweeted again.

What do you think of GMB discussing Meghan?  Leave us a comment on our Facebook page @EntertainmentDailyFix and let us know.