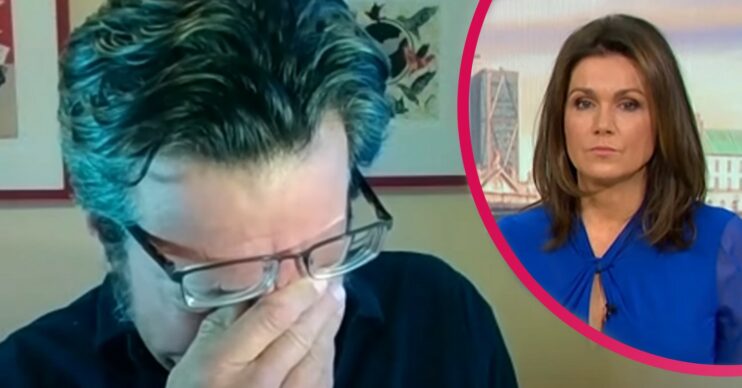 George Monbiot appeared on the programme

The debate was whether or not Insulate Britain were ‘martyrs’ and ‘modern-day suffragettes’.

What did the protestor argue on Good Morning Britain today?

George Monbiot, a journalist, was a guest on Good Morning Britain, and the debate proved too much for him. George broke down in tears part way through the debate, causing a furious reaction online.

In the debate, George argued on the side of Insulate Britain.

He said: “What they are desperately trying to do, and we are really desperate now, is to say ‘Look the clock is ticking, time is running out on the greatest crisis we have ever faced.’

“It is almost unimaginable what we are facing now and it’s very hard to talk about without crying because it’s the end of everything.”

What else did George say?

He then went on to say: “Everything we have dreamt of for our children, the good world we want for them, that could go.”

George defended what Insulate Britain is doing, claiming that they are ‘desperately’ trying to bring attention on a large scale to the climate crisis.

“We were one protestor away from tragedy,” she said.

When quizzed on why defending the group and bringing attention to the crisis is upsetting to him, George said: “I have two children and every day I think did I do the right thing.”

It was at this point that George broke down in tears.

Good Morning Britain viewers were not convinced by George’s tears, however, and took to Twitter to let their opinions be known.

“And the ‘Crocodile Tears’ award goes to that George fella,” a third viewer quipped.

However some Good Morning Britain viewers were on George’s side.

“I truly felt for that man in what he believes in, esp[ecially] as he showed his emotion on GMB, respect him totally,” one supporter said.

One added: “Hope you’re okay [George Monibot]. This was a hard watch but hopefully you got through to some people the gravity of what’s at stake.”

Another said: “George Monbiot you are a hero to me & many many others. We are in dire straits on earth.”

Opposing George in the debate was Dawn Neesom. She argued that Insulate Britain were not ‘modern-day suffragettes’ as the suffragettes ‘didn’t have a democratic voice’.

She said what Insulate Britain is doing wasn’t helping their cause and was causing “a lot of anger towards them”.

Who’s side are you on in the Insulate Britain debate? Leave us a comment on our Facebook page @EntertainmentDailyFix and let us know.