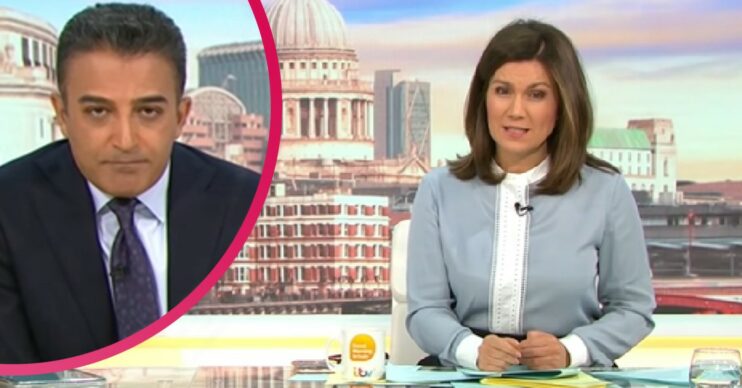 A GMB reporter sparked safety fears today after his broadcast from Ukraine abruptly cut out.

Rohit started his broadcast saying: “It’s been a very noisy night right across the city and what you can see behind me is a residential area.

“This is shop behind me, a bank. You can see the damage.”

Adil Ray spoke about the news that some shopping centres, high-rise residential buildings and private houses had been damaged.

Adil asked Rohit: “You are in a residential area, how worried are you about your safety? How in danger are you at the moment.”

Rohit began to respond, saying: “For us, the danger is…” before the live broadcast cut out.

Adil said: “We lost the line to Rohit there I think.”

Susanna Reid asked: “Can we go back because to leave it at ‘the danger is’ feels like…”

Just to reassure our viewers, Rohit is fine.

Rohit then appeared back on screen as he continued to answer the question.

However, as he was speaking, the link cut out again.

Adil said: “We seem to be having some technical issues. I think we’ve lost Rohit unfortunately.”

After seeing what was coming up on Lorraine after GMB, Susanna gave an update on Rohit.

She said: “Just to reassure our viewers, Rohit is fine. It was just a technical problem. He’s doing alright there in Kyiv.”

This isn’t the first time that a GMB reporter has had to reassure they’re safe in Ukraine.

Last month, Richard Gaisford was reporting live from Ukraine and some viewers had expressed concerns for him amid the Russian invasion.

However, after the worries from viewers, Richard reassured them he was fine on Twitter.

He wrote: “Very much appreciate concern being expressed for our safety in Kyiv. Hopefully this little video will alleviate any worries about our current situation whilst doing our @GMB broadcasts.”

In the video, he said the crew were in a location that they deemed “safe”.