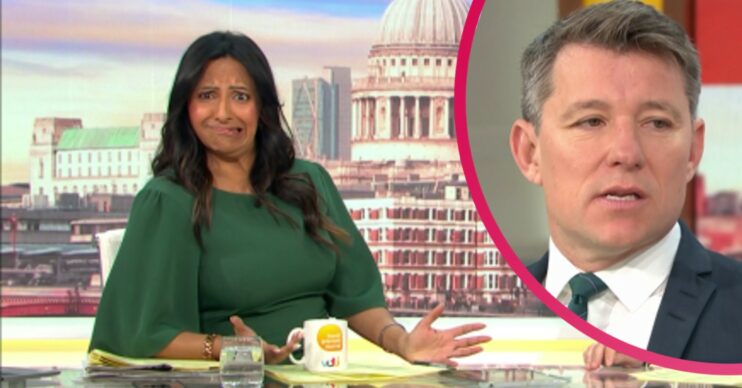 GMB host Ranvir Singh took a cheeky swipe at Ben Shephard today as he made his return.

The presenter, 44, stunned some Good Morning Britain viewers today when she began the show by pointing out her co-star’s appearance.

The show began with Ben saying: “I have been away but not feet up having a lovely time away.”

Ranvir then replied: “I was going to say you don’t look that rested.”

“I have just got in and she is already giving me grief,” Ben then said to the camera.

She then said: “You were yawning through the meeting this morning,” to which he replied: “It’s you.”

Some fans noticed the tension and took to Twitter to point out the awkward exchange.

This isn’t the first time viewers have claimed there was ‘tension’ between Ben and Ranvir.

The comments were sparked after the pair repeatedly spoke over each other on the programme.

Read more: Married At First Sight Australia: Are Domenica and Jack still together?

Rumours of a spat between the pair have plagued the show recently. As a result, ITV bosses were forced to speak out and deny suggestions that Ben and Ranvir don’t gel with each other behind the scenes.

I have just got in and she is already giving me grief.

A spokesperson for GMB previously told The Sun: “This is utter fantasy, Ben and Ranvir get on really well.

“Talking over each other occasionally reflects real-life relationships and is part of the authentic cut and thrust of a passionately topical programme like Good Morning Britain.”

What did you think of Ranvir and Ben hosting GMB today? Leave us a comment on our Facebook page @EntertainmentDailyFix and let us know what you think of this story.