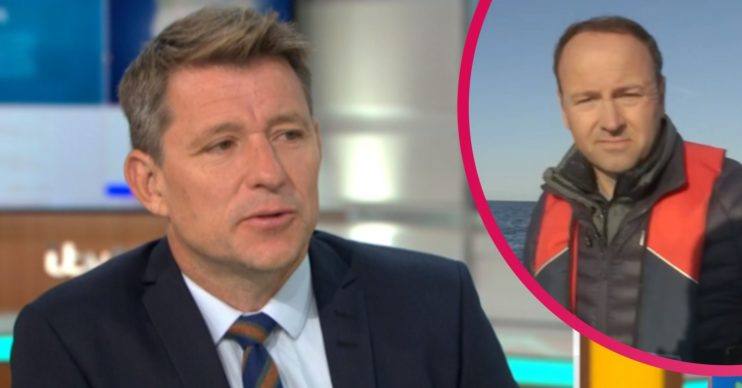 A number of those watching were uncomfortable

GMB was slammed by viewers as it featured a ‘painful to watch’ segment showing a migrant boat crossing the English Channel.

During today’s (Tuesday, August 4) episode of Good Morning Britain, correspondent Jonathan Swain reported from the Channel as a boat filled with young men made its way to England.

A British ship followed the vessel, ready to intervene should it come into trouble.

What happened with the migrant boat on GMB?

At points, the camera zoomed in on the people in the motorised dinghy. Jonathan initially shouted to them to ask where they had come from. When they didn’t appear to hear or understand, he asked if they were okay.

Presenter Kate Garraway, who is hosting alongside Ben Shephard, sounded concerned as she said: “I don’t know if you can see it from where you are, but when the camera zoomed in we could see the boat is sitting very low in the water.

“They all looked quite wet and someone on the port side was bailing out water. You can see, I don’t think that boat is meant to hold that many people.”

Jonathan replied: “No, it’s not. They will have left at first light. These are men who will have paid five or six thousand pounds to be on board.

“There are strict rules here, we can’t intervene. We have informed the Coast Guard. Border Force are on the water. They seem to be okay.”

Later in the programme, authorities rescued the boat’s occupants.

A number of viewers at home seemed deeply uncomfortable with what they were watching.

One demanded: “What is happening?! #goodMorningBritain #gmb.”

Another wrote: “Gosh this is painful. Just anything to get ratings #GMB.”

A third tweeted: “I know there’s not much sport on at the moment, but this is taking the [bleep].”

Gosh this is painful. Just anything to get ratings #GMB

“Why are they filming them and zooming in on them like they’re animals?? #gmb,” asked a fourth.

Someone else asked: “WTF is going on, on #gmb watching illegal migrants cross the channel.”

A sixth said: “This is infuriating. Turn it back. #gmb.”

Another wrote, alongside a crying emoji: “I feel uncomfortable watching this, help them.”

Not everyone had an issue with it though, as some praised the reporting.

“Some scenes on #GMB this,” said one, adding: “Great live coverage.”

Why are they filming them and zooming in on them like they’re animals?? #gmb

Wtf is going on, on #gmb watching illegal migrants cross the channel

Some scenes on #GMB this. Great live coverage.