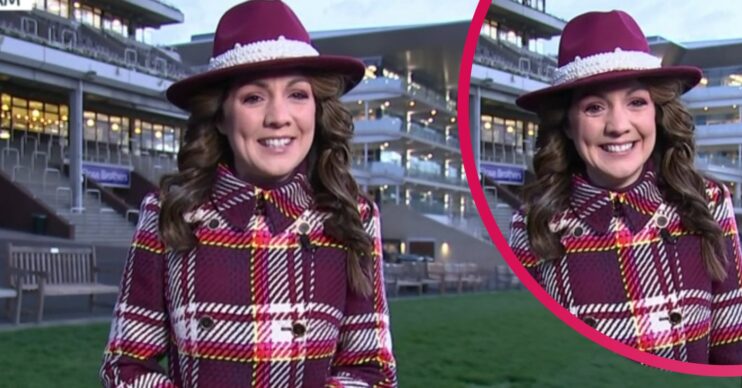 It caused a stir online

It wasn’t just the viewers who were poking fun at Laura. The 40-year-old was compared to Mary Poppins by her work colleagues too!

Meteorologist Laura stunned viewers – perhaps not for the right reasons – with her outfit choice today.

The 40-year-old wasn’t in the studio today. Instead, she delivered her weather forecast from the Cheltenham racecourse.

It’s the first day of the Cheltenham Festival today, and Laura was dressed for the occasion. She wore a plaid purple coat and purple hat today – and it didn’t take long for her GMB colleagues to poke fun at her for it.

“Well, I needed an umbrella earlier but thankfully not anymore,” Laura laughed. “You look as if you could elevate yourself,” Richard joked. “Great outfit.”

A side-by-side of Laura and Mary Poppins was then shown. “He’s not wrong,” Susanna Reid laughed as Laura tipped her hat at them.

Whilst Richard and Susanna seemed to like Laura’s outfit for the Cheltenham Festival, some viewers didn’t.

“Are you wearing that for a bet Laura?” another wrote.

“Why is Laura in fancy dress?” a third tweeted.

“WTF is Laura wearing? Is it mufti day?” another asked.

Some viewers did like Laura’s outfit though! “You looked absolutely Amazing,” one viewer tweeted to Laura.

“I’m in love with your coat, that’s gorgeous,” another said. “Very stylish Laura,” a third wrote.

Laura wasn’t the only star of GMB who received criticism during today’s show.

According to some viewers today, Richard was guilty of interrupting people on the show again.

Plenty of viewers took to Twitter to complain about the 65-year-old’s annoying habit again today.

“@GMB why are you letting Richard Madeley constantly interrupt everyone he interviews? It’s rude, embarrassing and really annoying! It’s painful and I’m not sure I can carry on watching when he is on! #ShutupMadley,” one viewer tweeted.

“@GMB Please ask Richard Madeley to not try to interrupt those he is interviewing, so rude,” another said.