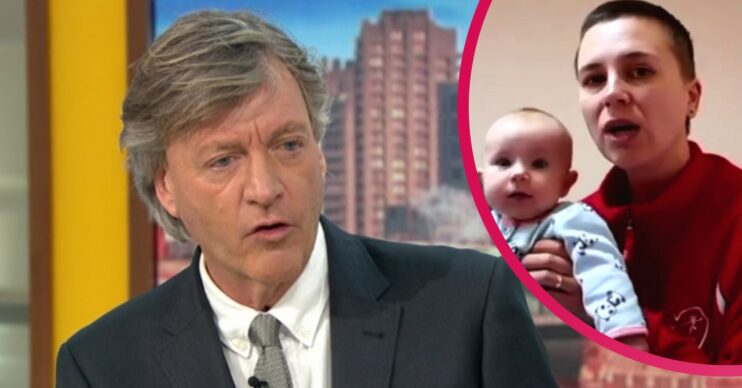 Some didn't agree with Richard's line of questions

GMB host Richard Madeley has come under fire on the show today (March 14), following an interview with a Ukrainian guest.

The presenter appeared alongside co-host Susanna Reid on the ITV programme on Monday.

During the show, the pair sat down with former television journalist Olena Gnes to discuss the latest strikes in Kyiv.

Whilst talking to Richard and Susanna, Olena explained that she is sheltering with her three young children in the basement of her apartment.

However, the shelter isn’t entirely safe as an explosion recently went off at a nearby location.

“We are very close to the place, so when it happened I heard a loud noise and my daughter woke up. It was very close.”

Richard interjected: “We know that two innocent people were killed, at least three injured. Those figures may go up as reports come in.

“You’re in a make-shift shelter very close to where this happened. What is your shelter?”

Later on, Richard brought up the possibility of a “nuclear” war.

“If NATO countries do take on Russia, if they do impose a no-fly zone, that could escalate things to an unthinkable degree.”

However, some viewers were far from impressed with Richard’s line of questioning.

Taking to Twitter, one complained: “Richard Madeley on #GMB has no understanding at all. Talking to this lady and telling her and her children about bombs dropping in the next apartment especially as he is in his comfortable warm studio and these people are in minus 15 degrees managing as best they can to survive!”

Another added: “Perhaps it’s not a good idea for Richard Madeley to start talking about the war going nuclear to that poor woman hiding in her basement with her three children in Kiev?”

Perhaps it's not a good idea for Richard Madeley to start talking about the war going nuclear to that poor woman hiding in her basement with her three children in Kiev?#GMB

Incredibly insensitive is an apt description for Madeley. What is he doing

In addition, a third wrote: “@GMB Why would Richard Madeley feel the need to mention that two people have been killed in an explosion close to apartment where they’re interviewing a mother and her children in a basement. Producers, please have a word, incredibly insensitive.”

A fourth agreed: “Incredibly insensitive is an apt description for Madeley. What is he doing?”

A fifth added: “#GMB is simply unwatchable with Richard Madeley on it and is a complete embarrassment, in particular when sensitivity and dignity is required.”

Another raged: “Why you let Richard Madeley interview this poor lady god only knows. Let’s point out that just a mile away two people died in some flats and that there’s potential for nuclear war.

“The man’s an utter [bleep]! Seriously five minutes of this [bleep] and I had to turn over!”

Meanwhile, others were more concerned over the safety of Olena and her children.

One tweeted: “As heartbreaking as Olena’s story is… her little girl managed to bring a smile on my face. Hope they remain safe.”

A second posted: “@GMB Olena’s family are so brave, wish we could do more for you all. Stay safe!!”

ED! has approached ITV for comment on this story.