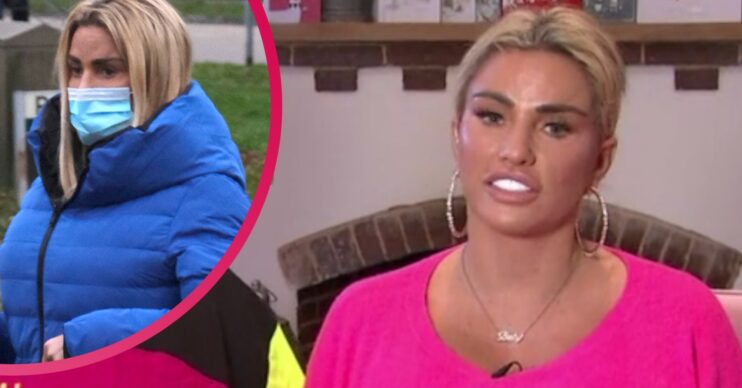 The reality star has vowed 2022 will be her year

Katie Price appeared on GMB today alongside son Harvey and revealed 2022 is going to be her year.

The star, who narrowly avoided spending Christmas in prison, told Susanna Reid and Richard Bacon her plans for the new year.

She said that wedding bells and babies are very much on the cards as well as “no dramas”.

Katie said: “2022 is definitely my year. First of all, 22 is my lucky number, my birthday, and I don’t know if you remember on Deal or No Deal, the main box, that was 22. This has to be my year of no dramas. Honestly, so much has happened last year. I’m thankful.”

This has to be my year of no dramas.

Susanna asked: “Thankful I’m sure about the fact that you’re not in jail, Katie. Let’s just address that before we address everything else. Things could have been very different, couldn’t they?”

The host was referring to Katie crashing her car last September and being arrested on a number of driving offences.

The mum-of-five replied: “They could have done, and the events leading up to it were really traumatic and it’s still been traumatic after so I’m not ready to talk about it yet.

“But what I can say is obviously I went to The Priory, and I’ve made the decision finally that I see a therapist every week forever, to deal with the traumatic events that led me up to that car because I’m very good at hiding things.”

She went on to say that she would talk about the traumatic events when she felt ready.

Katie also revealed she and Harvey are filming another documentary together before Susanna asked: “Is there going to be a wedding this year?”

Katie replied: “I hope so. This is going to be the year for me. Babies, marriage, I want it all. Like I’ve said before, I’ve definitely found the one with Carl [Woods] and we will get married and it will be in England.

“It always will be in England because the family are there, my mum’s terminally ill so she can’t travel, so I’d never get married unless my mum was there as well.”

She added: “I am in a very good headspace now.”

Reports claimed last month that Katie would be penning another book and plans to ‘name and shame’ her enemies.

She also reportedly wants to tell the full story about her drink-drive crash with readers.

Good Morning Britain airs on weekdays from 6am on ITV and ITV Hub.