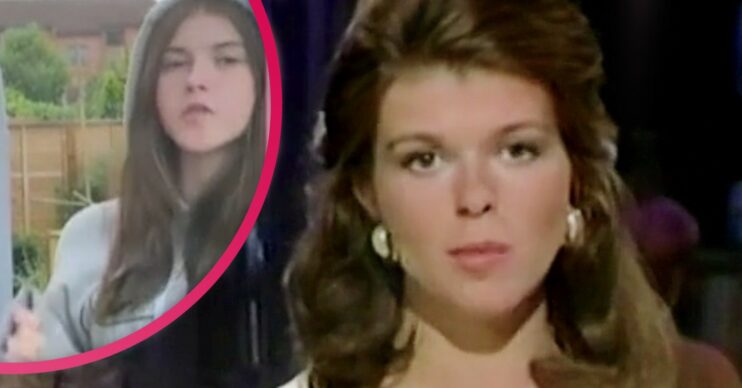 They look so much alike!

During the show, hosts Ben Shephard and Susanna Reid played a clip of Kate in her first TV appearance.

And in the throwback video, Kate looked just like daughter Darcey when she was young.

Kate, 54, won a special award at the ceremony in London yesterday in recognition of her work during the Covid pandemic.

And she explained to viewers that it was a huge surprise.

“All of you are sneaky liars,” she laughed to her colleagues.

“You knew but you didn’t tell me and it was right at the end of the afternoon when I’d completely unravelled. My false eyelashes were coming off.

“I was quite good on the drink, but I’d just generally unravelled.”

However, it was the video that was shown at the awards – and to viewers during the show – that got her colleagues talking.

Throwback from the 1980s

The video showed her throughout her career, starting with her stint as a newsreader on Central in the late-1980s.

Ben and Susanna couldn’t believe how much Kate, with dark hair, looked like her 15-year-old daughter.

“That is a little bit of Darcey, isn’t it,” Susanna said looking at a freeze-frame of her early days.

“Isn’t that amazing,” Kate responded. “Because I never think we look alike.”

The videos continued, when Darcey and son Bill sent their mum Kate a touching message on GMB.

Darcey said: “Hi Mum! I just want to say thank you so much for everything you do for me and Bill and we’re so proud of you.”

Bill chipped in: “And thank you so much for looking after dad and trying to make him get better.”