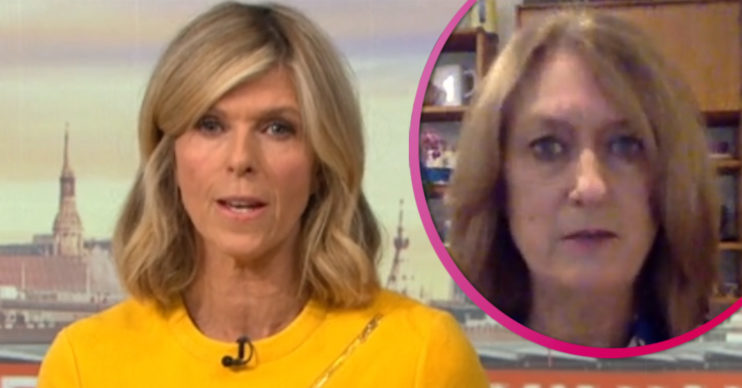 Ms Ferrier has come under fire after she travelled to Westminster from Glasgow despite suffering from coronavirus symptoms.

When the MP received her positive coronavirus test result, she travelled back home to Scotland on public transport. She’s been suspended from her party.

'She's brought problems to the UK Parliament now that they are going to have to deal with.'

Former Home Secretary @Jacqui_Smith1 reacts to the news that SNP MP Margaret Ferrier travelled on a train despite testing positive for Covid-19.

As a result, Kate questioned whether politicians are taking the virus seriously enough.

“I don’t completely agree with you, Kate, that all politicians haven’t done the right thing,” Jacqui said on the show.

Kate hit back and said: “I didn’t say all politicians.

“I said this kind of behaviour feeds into a sense from people that politicians are urging us to do things that they’re not doing.”

What did Jacqui Smith say to Kate Garraway?

Up until the disagreement, Jacqui had been scathing about the MP.

“The story is unbelievable in my view,” she began.

“I mean, I hope she gets better quickly – but it’s just inexcusable.”

I mean, I hope she gets better quickly – but it’s just inexcusable.

She continued: “That’s why I think it’s right she’s had the wipe removed from her, to be honest.

“I think it’s quite difficult that she can continue on as an MP.”

What else did Jacqui say?

Co-host Adil Ray then asked Jacqui whether she thought Ms Ferrier should resign.

“You don’t want to overstate this but she’s brought problems to the UK parliament that they’re going to have to deal with,” she responded.

“It’s completely irresponsible of her.”

She concluded: “I think it’s pretty untenable given what she’s done, for her to continue in her role.”

What did Margaret Ferrier say?

Subsequently, she detailed her actions and attempted to provide reasons for them.

“I apologise unreservedly for breaching COVID-19 restrictions by travelling this week when I shouldn’t have,” she said.

“There is no excuse for my actions.”