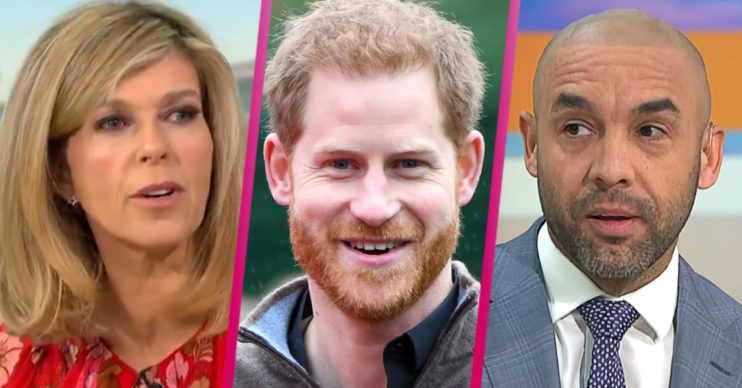 The pair have very different opinions

The ITV stars both spoke out about the Duke of Sussex following his appearance on Dax Shepard’s Armchair Expert podcast.

On the daytime programme today (May 14), Kate gave her verdict on Harry’s comments.

Appearing alongside co-host Ben Shephard, the presenter spoke about the impact Harry’s comments could have.

“Because we have had people say to us already, ‘What does he mean about the cycle of pain? I grew up in a house where there was abuse, I had all sorts of things happening in my life.’

He is telling his story but it instantly sounds entitled

“And of course, we know pain is pain, it might be a different sort of it but it’s still difficult.”

Furthermore, Kate, 54, shared: “He is telling his story but it instantly sounds entitled, and it sounds without empathy, doesn’t he?

“I wonder what it will be like to talk to him in five years’ time. And look back and think about what’s done.”

However, Alex appeared to defend the Duke on Twitter.

The weatherman, who clashed with Piers Morgan over his comments about Meghan Markle, fired back at the criticism.

He penned: “The beauty of a podcast is that you can hear the way it was said. Did you listen or did you read the media summaries.”

In addition, Alex concluded the post with a reflective thought.

The GMB star, 40, added: “Side note: It is possible to love Prince Harry with the same heart that you love the Royal Family with.”

Meanwhile, on the podcast, Harry compared life in the royal family to living in Jim Carrey film The Truman Show.

The beauty of a podcast is that you can hear the way it was said. Did you listen or did you read the media summaries. Side note: It is possible to love Prince Harry with the same heart that you love the Royal Family with.

He also blasted Prince Charles’ parenting skills after he was left to bring up Harry and his brother William.

“I’m going to make sure I break that cycle so that I don’t pass it on, basically.”

Furthermore, Harry also opened up about having therapy for his mental health.