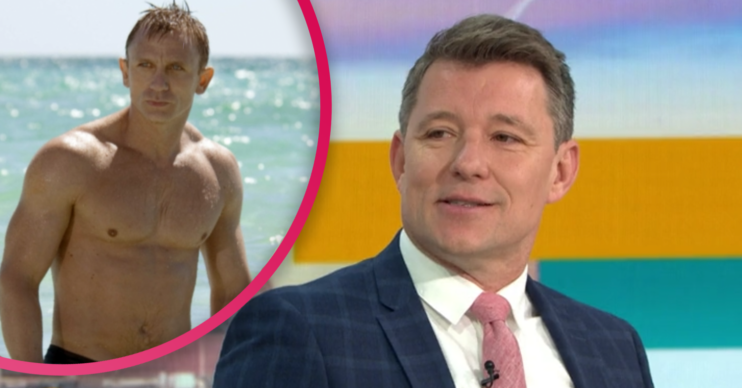 He compared himself to Daniel Craig

Today was Ben’s first day back after his Christmas break and the show wasted no time in showing viewers what Ben got up to during his time off.

Over Christmas, Ben took a dip in the chilly sea off Devon, and shared the video to Instagram.

And it was this video that producers aired on the show today.

What happens in the video posted by GMB host Ben?

With the track It’s Raining Men accompanying Ben’s dip, the GMB host could be seen with his top off running into the sea.

His family and friends can be seen laughing as Ben makes it back out of the sea, and it’s this snapshot that was also shared on screen today.

Sharing the video of himself running into the sea last night, Ben said: “Back to work tomorrow, was reminiscing about Christmas and I realised I didn’t post this!

“I’m not sure how yours was, but ours was v soggy, and that was before we went swimming.

“To be fair we couldn’t get any wetter by the time we got to the sea,” referencing the fact that it was pouring with rain.

What happened when the video was shown on GMB?

After showing the video, a picture of Daniel Craig as Bond flashed up on screen.

Susanna quipped: “I mean, there you are.”

The host told Susanna he was “relieved to come out alive” as she joked about his “gammy knee” following an injury he got over the summer.

Gushing over his “similarities” to Daniel Craig, Susanna added: “I mean frankly you can’t tell the difference between you both.”

Ben joked: “It’s been said before hasn’t it? Ahh so similar.”

The presenter then declared that the temperature in the sea was “biblical” – a fact poo-pooed by weather girl Laura.

She told Ben it was actually 11˚C and that she had “just checked”.

And, with Kate, Susanna and Laura giggling, poor Ben appeared to have had enough and told the trio: “Stop laughing!”

Fans reacted in pretty much the same way as the Good Morning Britain ladies.

“I was shivering just watching this,” declared another.