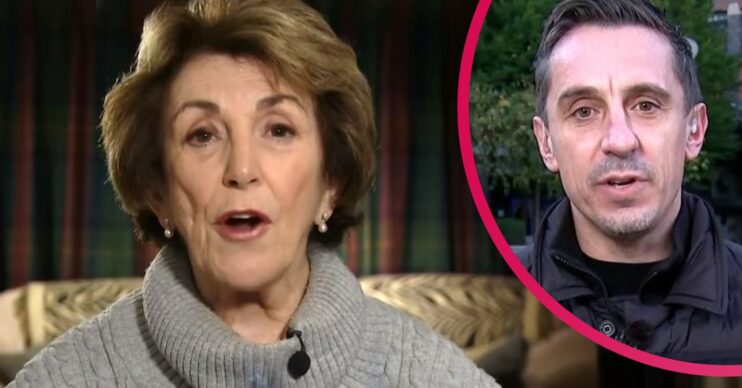 The Universal Credit cut means thousands of families will lose £20 a week – equivalent to £1,040 a year – which was a boost brought in during the COVID-19 pandemic.

Former Conservative MP Edwina had suggested that people struggling financially could get jobs as “kitchen porters”.

Speaking on Good Morning Britain, Edwina said: “What we have to realise is that we have something like a million vacancies being advertised in the country, we have record numbers of vacancies, we have whole industries desperate for people to come in to work – from catering to the care industry, food processing.

“Businesses are actually desperate and pushing up wages and so it doesn’t make any kind of sense for us to pay people to stay home.

“What we really want is for people to get out there and get the jobs.”

However, host Susanna Reid pointed out: “Not everybody on Universal Credit doesn’t have a job.

“40% of those on Universal Credit are already in work.”

Edwina added that the government are trying to help by putting more money into “supporting, tutoring and mentoring” people to get back into work.

Gary was seen shaking his head, as he hit back: “Well, let me just translate what Edwina said for people up and down the country because it’s a message Conservative MPs have been entrenching in our minds for a long time.

What did Edwina Currie say?

“The next thing she said was, ‘Go and get a job, get back to work you lazy sods. Get off your backsides, stop watching Good Morning Britain and other television programmes and go and get a job.’

“It’s the way in which this sort of language appears from Conservative ministers for so long.

“You know, ‘Immigrants are all taking our jobs, homeless people are all beggars on the streets.’ They’re basically alienating the people.”

Gary added: “To me the language is always divisive, it’s not helpful. It’s really dangerous, we’re one team in this country, we’re one group of people.

“Honestly, to remove Universal Credit payments at this moment in time is brutal.”

Later in the interview, Edwina said there was plenty of catering jobs around Christmas time.

As she started talking over Gary, host Alistair Campbell said: “Let him speak!”

Gary said: “It’s a scandal, for you to go and say someone should just go and be a kitchen porter it’s ridiculous.”

At the end of the interview, Alastair quipped: “You should be a politician and Edwina is going to be a kitchen porter.”

Viewers shared their thoughts, with many praising Gary.

Read more: GMB hit by Ofcom complaints over interview with guest who stormed off set

One said on Twitter: “Gary Neville ripping her to bits on GMB! Superb!!!”

However, others agreed with Edwina as one said: “Totally agree with Edwina Currie. Why should the same people have to pay for other’s on benefits?”

Another tweeted: “Totally agree with Edwina Currie… that Gary Neville should be a politician!”