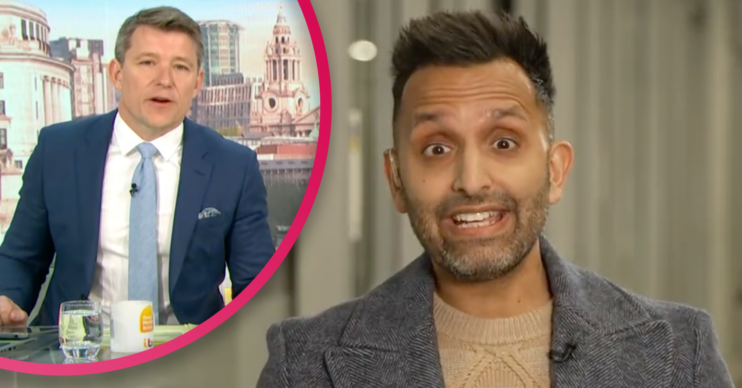 He's in Poland highlighting the plight of refugees

GMB welcomed one of its resident health experts Dr Amir Khan to the show today (March 25).

However, his appearance provoked quite the response from disgruntled fans.

Many took to Twitter after his chat with hosts Ben Shephard and Charlotte Hawkins to voice the same complaint.

What did Dr Amir say on GMB?

Dr Amir had travelled to Poland to see first hand the medical problems facing the newly displaced refugees from Ukraine.

Speaking from a humanitarian aid centre, he detailed what he’s seen there – including dehydration, infection and trauma.

Dr Amir said: “The scale of it, unless you’ve been here, is hard to imagine. There’s 6,000 people coming through here every single day from Ukraine. Their immediate needs are being met – food, water, shelter, safety – then we open up the health needs.

“Many of them have been travelling for days, they’ve been on packed buses, viruses, diarrhoea, infestations like scabies and lice are common – all of these are being treated by the medics. There’s lots of chest infections, people with chronic diseases need their medication. The medics are working round the clock here.”

He praised the Polish for their work so far, saying how welcoming and well-organised the centre is.

However, he added. “We can’t just rely on the countries that border Ukraine – it has to go wider.”

‘They see around 6,000 refugees arrive through these centres every single day’. @DrAmirKhanGP travelled to Warsaw to meet patients who have fled war and suffered injury, trauma and dehydration. pic.twitter.com/bi3lLcoqFb

The vast majority of GMB fans didn’t really comment on the humanitarian crisis Dr Amir was trying to highlight.

Instead they all took to Twitter with the same complaint.

Namely, if NHS GP Dr Amir is in Poland, it’s no wonder it’s such hard work getting an appointment with a doctor.

One said: “Thanks for ignoring your patients Dr Amir TV GP.”

A second said: “It’s Dr Amir on a jolly again, no wonder I can’t get an appointment.”

A third commented: “Dr Amir get home and Deal with your patients.”

“Couldn’t an actual journalist go to Poland to report rather than Dr Amir, who as a GP, is badly needed to be actually doing what he’s trained and paid to do back here in the UK!!” declared another.

“Maybe if Amir spent less time on TV and more time doing actual Dr stuff then there would be less waiting times,” concluded another.