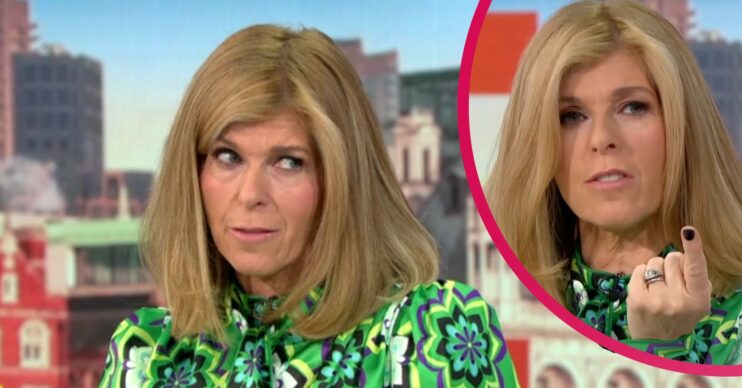 GMB bosses tell Kate Garraway to ‘be quiet’ during debate

GMB bosses were forced to tell Kate Garraway to ‘be quiet’ during a debate on today’s show (Friday, January 7).

The awkward moment came during a segment of the show where the hosts and guests discussed the fact that the army was being deployed to hospitals in London to help the NHS.

What was Kate Garraway told during the GMB debate?

Kate and her fellow GMB host, Ben Shephard, welcomed Iain Dale and Kevin Maguire onto the show today to engage in a debate.

The debate in question concerned the fact that the army is being deployed to London hospitals to help the NHS. Approximately 200 army personnel have reportedly been deployed to hospitals in the capital.

London is the epicentre of a surge in Omicron cases at the moment.

As Kevin Maguire spoke about the issue at hand, Kate interjected and was subsequently told to ‘be quiet’ by her bosses.

Referring to the people speaking to her through her earpiece, she said: “One person – just very quickly because everyone’s telling me to be quiet, but that’s nothing new.”

Kate’s co-host and guests then burst into laughter, and the debate continued.

This wasn’t the first mishap to happen on GMB this morning.

Things didn’t get off to a good start for the pair as the show was hit by technical issues. The camera kept glitching, leading to random cuts to a black screen.

On the black screen was the caption – ‘KATE & DEREK STILL ULAY’

Ben addressed the issues straight away – by blaming Kate!

“We have an issue – Kate, have you been in the gallery?” he asked. “What, because something’s going wrong?” Kate replied.

“Well, you spilled something and our mixing desk keeps getting stuck. Every now and again, strange things keep appearing on the screen,” Ben explained.

“For once, I think I might not be responsible,” Kate said. “Which is a shock in itself!

Technical issues and Kate being told to ‘be quiet’ weren’t the only things that had GMB viewers talking about today.

Many viewers were left very distracted by Kate’s outfit on the show this morning too.

The 54-year-old presenter was wearing a green floral dress, which led to some fans making some unflattering remarks online.

“Kate I’m sorry but it looks like your wearing a 1950s curtain!” one viewer joked.

“Nice to see Kate Garraway has recycled the luxury Christmas wrapping paper into a dress to wear to work,” another tweeted.